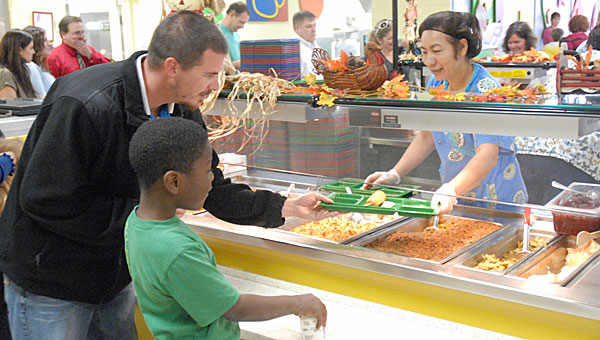 Miniature pilgrims and Indians filled the Valley Elementary School lunchroom Nov. 17, as hundreds of families gathered together to celebrate Thanksgiving.

During the first day of the school’s family Thanksgiving feast, kids dressed up to honor the first Thanksgiving as they shared what they were thankful for this year.

Because the Thanksgiving lunch draws several hundred kids and parents per day, the school held the lunch for some first- and second-grade students and their families Nov. 17, and hosted kindergarten and other first-grade students on Nov. 18.

While waiting in line, several of the kids and parents reflected on what they were thankful for this year.

For VES student Katie Chimento, who was wearing a paper headdress, the holiday was a time to reflect on her blessings, such as her dog, Spike. Her mother, Melissa, said she was thankful for her family and friends.

Andy Davis, an active member of the Army National Guard and step-father of VES student Josie Davis, said he was thankful for the chance to spend time with his family.

“I’m thankful to be here today,” Davis said. “And I know it means a lot to him.”

For the Weaver family, delicious food, friends and family topped their 2011 Thanksgiving lists.

“Hot dogs,” 2-year-old Luke Weaver shouted when asked what he was thankful for this year.

Nolen, a 7-year-old VES first-grader, said he was thankful for his family, and the “good food” he was about to eat at the school.

VES secretary Shannon Patterson said she was giving thanks for the school’s faculty, and the “cutest kids in the county.”

Kids, parents give thanks at MVES