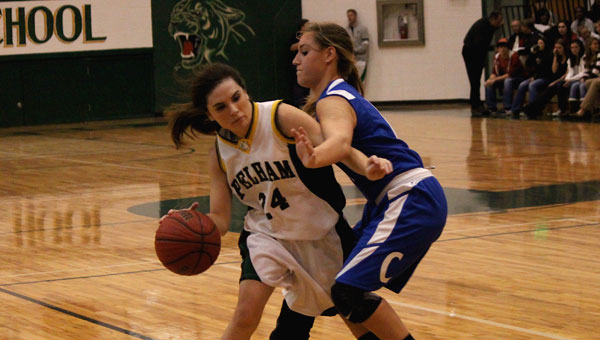 The two squads battled back-and-forth throughout the first half as the Hornets (0-1) jumped to a quick 4-2 lead early in the first quarter following a layup from junior Amanda Mock and a subsequent steal and bucket from senior Perri Lambert. Pelham (2-1) answered with buckets from seniors Erin Whitman, Sydney Days and Ashley Kate Kepler to regain the lead, but Chelsea made an art of big finishes as junior Meghan Lanzi hit a 3-pointer at the buzzer to lessen the Pelham lead to 8-7 to end the first quarter. The Hornets finished a neck-and-neck second quarter strong again, as senior Allie Luster stopped a Pelham fast break with a steal and pitch to Lambert for a layup to close the half on top 21-17.

“There were definitely jitters — first game, everybody’s nervous,” said Lambert, a fourth-year starter for the Hornets and captain of this year’s squad. “I think we hustled and played like we should have.”

The Panthers came out firing, outscoring the Hornets 12-1 in the third quarter to regain the lead at 29-22 thanks to aggressive defense.

“We were 0-for-8 in the third quarter, taking good shots, shots that we take every day in practice,” Chelsea head coach Wayne Trucks said. “We had good looks, and we took good shots — they just didn’t go in.”

With the lead, all the Panthers had to do was maintain, and they did.

“Our main focus defensively is always energy,” Pelham head coach Jeremy Simpson said. “That was the message second half. (Chelsea was) doing a really good job of stopping penetration, and that’s our goal is penetrate to the bucket. They did a good job of doubling, and we did a good job of finding the open person.”

The Hornets fought, shortening the Panthers’ lead to 31-30 late in the fourth quarter, but Pelham capitalized on missed shots and Hornet turnovers to seal a 36-32 win.

“I thought we pushed it hard,” said Days, who scored 8 points for Pelham. “I felt we fought harder than the first three halves. The fourth quarter, we picked it up and actually started fighting.”

Whitman and Taylor both added 8 points on the night for the Panthers. Mock led the Hornets with 13 points, while Lanzi and Lambert totaled 6 points each.

“It’s our first game, it’s their third, and that’s a big difference,” Trucks said. “My girls always fight. It doesn’t matter if we’re down 1 point or 10 points, you will always see effort out of them. They understand what’s important, they understand what we do as a team, and effort is something that we always have.”