In the city of Alabaster, we are blessed to have the Shelby Baptist Medical Center. The employees at Shelby are allowed to express their religious views and pray for and with their patients.

The employees will not push religion on you, but if you are in need of prayer, kind words, a listening ear and compassionate heart, then you just might find yourself under the care of nurse Wilma Richards. (I call her the praying nurse —she was that and more for me four years ago).

Richards, a Fort Payne native, finished high school and then attended the University of Alabama-Huntsville where she received her degree in psychology.

Later, unfulfilled in that field, she got her nursing degree.

“I really had always wanted to be a nurse, and I just took the long route,” she said.

Taking off 10 years to raise four sons (now ages 41-48) was never a regret for Richards. In Clay County, she was a home health nurse, and in the year 2000, one of her friends talked to her about “the religious freedoms” and perks of the Baptist Health System hospitals. To Richards, this sounded perfect as it corresponded to her lifestyle and beliefs. 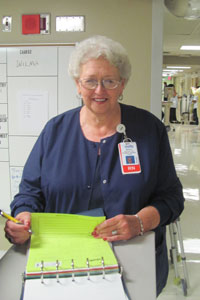 Wilma Richards works to put patients at ease through her job as a nurse at Alabaster’s Shelby Baptist Medical Center. (Contributed)

Richards had always been devout in her beliefs, and is a true believer in the power of prayer. When one of her daughters-in-law was ready to “throw in the towel” trying to conceive, Richards prayed for a blessing. Richards’ son jokingly said he would like three sons. Later, the couple called to report triplets — three boys were on the way.

The stories go on and on with emphasis on the power of prayer.

“It’s the little things that mean so much to a hospital-bound person,” Richards said. “Maybe they need you to take a few minutes, hold their hand, fluff their pillow, get them a juice, remark on their visitors, just whatever they need. It is my job to try and put them at ease, and let them know I really do care. I pray for all my patients whether they know it or not.”

Three days a week, she works 12-hour shifts. The elderly and oncology patients are her favorites.

Now Nana to six grandsons, she enjoys her grandchildren and living each day for the Lord.

“I wouldn’t change a thing,” she said.

The most beautiful place she’s ever been in the United States is Maine, but Shelby Baptist with its new South Tower, chapel, water features and all private rooms makes her work environment mighty special. She loves coming to work and believes in the perks and merits of the Baptist Health System.

Richards is a special lady, a talented nurse and a prayer warrior who is close to home.