I am grateful for people who do difficult and unpleasant things so I don’t have to. Farmers and ranchers who provide food, laborers who bring oil up out of the ocean to power my home and automobile and city workers who haul away my garbage.

Freddie Akridge asked me to write about someone for whom she’s grateful.

“Ken Mobley and I want you to write an article about Ollie Taylor,” she said. “Our community needs to know how special she is. She’s raised many children for the DHR and worked at various places in Calera.”

Taylor, who turns 93 on Dec. 18, just returned home from Shelby Ridge after injuring her hip in a fall. Her nieces, Pauline Mixon and Margaret Wilson, shared with me about their aunt.

“She was born Ollie Mae Mathis and raised in Columbus, Ga.,” Mixon said. “She married George Taylor, our daddy’s brother, who was stationed in the military.” 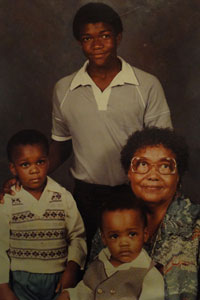 Mrs. Ollie Taylor, who soon turns 93, has cared for many children in her home. In this photo is Jason Green on her lap, William Swift (back) and Melvin Green. (Contributed)

Mixon said the Taylors toured all over the world — the Philippines, Guam, Germany, New York, New Jersey and California. Their one child, Theodore, who passed away in 2005, attended high school in Calera while living with his grandparents, Lillie and Jim Taylor.

“After 30 years in the military, George retired, and they moved here. That was around ‘63,” Wilson said. “They adopted my sister’s baby daughter, Wanda Taylor Sailes, and fostered several kids. William Swift was 2 years old when they got him. They had the McDaniels sisters, three brothers from Birmingham — Jason, Melvin and Michael Green — and more than that. There’s just been too many to count.”

Wilson said the hardest to give up was a baby.

“It just hurt everybody when they took the baby. George didn’t want Ollie to take any more, but she continued to take them in.”

After George’s death in 1978, Taylor volunteered at the senior citizen centers in Calera and Montevallo and worked as an election officer. She retired as a caregiver at the age of 90.

Taylor was honored last year in the naming of the new district of the Women’s Missionary Society at the Alabama River Region annual conference because of her hard work and dedication to Grant Chapel A.M.E. Church.

“She’s something else,” Wilson said. “She’s been a part of our lives from the time we were young.”

“When it’s too hard for you, it’s just right for God,” Mixon said. God uses caring individuals like Ollie Taylor to strengthen the lives of others.

People you meet at the places you go