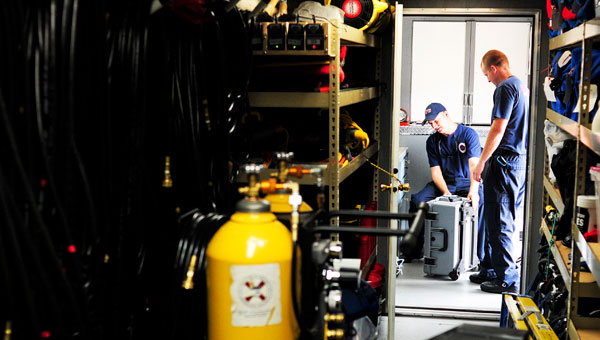 Pelham firefighters examine equipment in the city's Station No. 3. For Pelham police officers and firefighters, Thanksgiving usually brings a typical day on the job. (File)

As families and friends come together in their homes across the city for Thanksgiving Day, members of the Pelham police and fire departments try to bring the holiday feel to their buildings while keeping residents safe.

Every year, a shift of firefighters and police officers work around the clock on major holidays, just as they do every other day, said Pelham police Lt. Davy Lott.

“This week really kicks off the shopping season, so we try to be a little more vigilant this time of year,” Lott said. “But we do what we can to make sure the officers see their families on those major holidays.”

Lott said shift commanders typically will work with officers who live in or near the city to allow the officers to use their lunch breaks to eat Thanksgiving dinner with their families.

“Especially with Thanksgiving, everybody kind of scatters out to eat with their families,” Lott said. “On other big holidays like Christmas, the supervisors will get together and pitch in some money to feed the shifts.”

Lott said the days between Thanksgiving and Christmas typically bring a rise in the number of thefts, such as burglaries and car break-ins. He said a high number of drunken driving arrests used to be an issue for the department around Thanksgiving, but said the number has subsided in the past few years.

“It was really more of a problem in the past than it is today,” Lott said.

Elsewhere in the city, firefighters also try to celebrate the holiday while responding to calls across the city.

“If the guys on a shift want to get together and cook a big meal, or bring a covered dish that day, I personally don’t have a problem with it,” said Pelham Fire Department Battalion Chief Blair Sides. “But other than that, it’s a pretty typical day for us.”

Sides said Thanksgiving typically is slow for the department during the daylight hours, but begins getting busy as the day draws to a close.

“The calls start picking up a little bit that night,” Sides said. “Sometimes people like to party a little too much, and they end up getting sick.”