Sheila Weldon said her family enjoys sweet potato biscuits all year long, but they really start looking for them on the table around Thanksgiving.

“I’d never heard of them until I married Mike,” she said, “Then he wanted me to make them.”

She got a recipe from her Nanny (Louise) Moore and made him some, but they were not quite right, he told her. So she tweaked the recipe a bit until she got it right.

Although sweet potato biscuits is one of her family’s favorites, they and numerous friends and family members enjoy her beautifully decorated cakes.

Some of the cakes you see on television and in magazines have cardboard in them, Sheila said. But her number one concern when baking and decorating a cake is that it’s 100 percent edible.

Sheila said she thinks her love for baking began back in her Nanny Moore’s kitchen when she was a little girl.

“She would let me lick the bowl and spatula when she baked, and there was always a cake on the table.”

But she said the hobby really started when she did a panda bear cake for her older son’s first birthday.

After that she started baking cakes for the birthdays of nieces and nephews, then it spread out to friends and events at Cornerstone Christian School, where her son attended. And, now today, she finds herself doing cakes for weddings and other events. 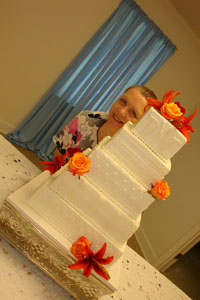 Sheila Weldon with one of her wedding cake creations. (Contributed)

Sheila had worked at Protective Life Insurance Co. when becoming pregnant with her older son, she said, and was fortunate enough to be a stay-at-home mom after he was born. This gave her time to devote to her hobby.

Sheila’s 14-year-old Alex is not a “kitchen person,” she said, but son, Nick, a 26-year-old new husband and firefighter in north Alabama, enjoys baking. He makes birthday cakes for firemen’s children and recently made Alabama and Auburn cakes for some friends.

Sheila said she plans to bake a coconut cheese-cake and probably a German chocolate cake for Thanksgiving this year, along with sweet potato dumplings and, of course, sweet potato biscuits.