The sheriff’s office has charged a Birmingham woman with the Nov. 22 robbery of a North Shelby convenience store.

Donna Marie Brasher, 24, was charged with robbery and receiving stolen property. She is being held at the Shelby County Jail on bonds totaling $75,000. 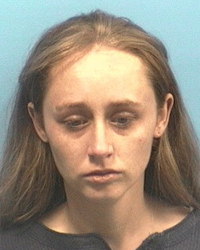 At about 1:02 a.m. on Nov. 22, the sheriff’s office received a call of a robbery from the clerk at the Kangaroo Express in the 2600 block of Valleydale Road, according to the sheriff’s office press release. The store clerk said the woman entered the business with a knife and demanded cash before fleeing in a white passenger car.

At about 4:22 a.m., the sheriff’s office received a call from an occupant in a business also in the 2600 block of Valleydale Road reporting a suspicious vehicle, according to the release. The vehicle description matched the description given by the clerk at the Kangaroo Express.

The sheriff’s office arrived and deployed a K-9 unit. Brasher was taken into custody in the nearby woods without incident or injury, the release stated.