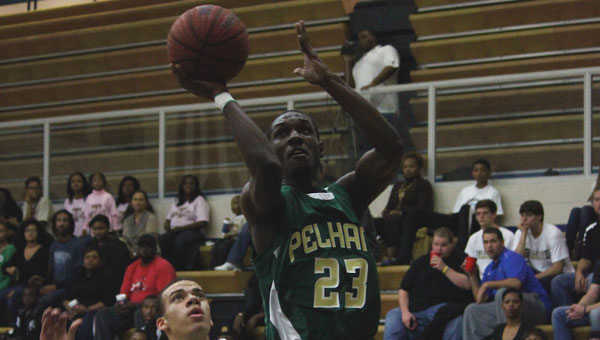 CHELSEA — The Thompson Warriors (6-0) extended their early-season dominance and unbeaten record with a 58-48 win over the Pelham boys’ basketball team Nov. 23 to take the Chelsea Thanksgiving Tournament title for the second year in a row.

The Warriors overcame a slow start to take the win, following a first quarter controlled by the Panthers, who shot 61 percent from the field in the first half. Jaylon Jones and Pelham junior Justin Brooks each hit a 3-pointer for their respective squads in the final minute of the opening quarter, and Warriors senior Demarcus Threatt sunk a jumper seconds before the buzzer, cutting Thompson’s deficit to 16-18 heading into the second quarter.

“We weren’t executing defensively at all,” head coach Patrick Davis said of his Warriors’ first-quarter performance. “(Pelham) did a good job, and we were giving up too many direct drives to the basket. Then we kind of buckled down. We made it a focus to really make them earn looks at the rim.”

Thompson jumped ahead early in the second quarter after quickly scoring seven unanswered points and maintained the lead throughout  the remainder of the first half with the help of three 3-pointers from Jaylon Jones and a fade-away 3-pointer from junior Marcus Lewis to maintain a 36-30 lead to close out the half.

“I think in the first quarter, we just came out with a lot of energy and maybe surprised them, but then they matched it and came back and did what they do,” Pelham head coach Joel Floyd said. “They’re a really good basketball team, so they made some shots, and we didn’t match them.”

Thompson came out firing again, going on an eight-point run to start the second half, giving the Warriors their largest lead of the night at 44-34. The Panthers answered with a six-point run of their own, cutting the deficit to 44-40 following a steal and two buckets from senior Xavier Lacey and Quadash Williams layup.

Thompson entered the final stretch with a 49-42 lead, and the Warriors only extended it to finish out the game thanks to aggressive play from Threatt, who hit two layups over multiple defenders and a 3-pointer for his squad, and senior Kenny Nabors, who added a layup and a huge shot block on the Panthers to start the quarter strong.

Lacey led the Panthers with 20 points on the night and was named to the All-Tournament team along with Brooks, who added eight points and five rebounds for Pelham. Junior Kenny Meadows had a team-high seven rebounds.

“I’m ecstatic about where we are,” Floyd said of his Panthers. “We’re sitting at 4-1, and we couldn’t ask for anything more. We’re a young team — lots to build on. I am very pleased with where we are right now.”