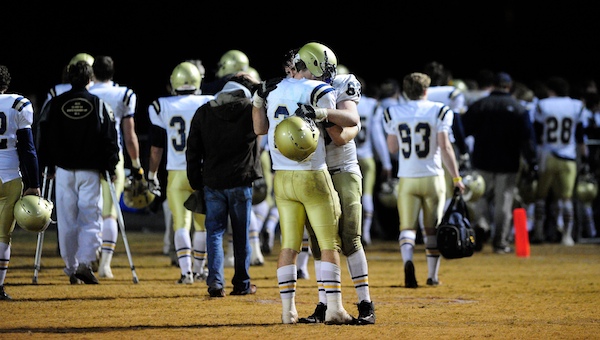 HARTSELLE — Everything disappeared in the blink of an eye for Briarwood Christian School senior Sam Whitaker.

With more than 40 senior teammates, Whitaker had big plans for the final season of his high school football career. The Lions, returning 18 starters from a team that reached the Alabama High School Athletic Association Class 5A championship game a year ago, were meant to play for a fourth state title in school history.

Briarwood Christian’s championship dreams came crashing down following an interception by senior quarterback Ben Craft with 10 seconds remaining in a 16-14 loss on the road at undefeated Hartselle in the Class 5A semifinals Nov. 25.

“I’m in shock,” Whitaker said. “We never thought this would happen to us. We were the team everybody’s been waiting on, and it ended this way. It doesn’t feel right.”

The Lions (12-2) struggled with the Tigers’ potent option attack defensively and couldn’t get any momentum going in their prolific passing game until the final quarter. Craft’s fourth interception in the game in the final minute gave Hartselle revenge for a 24-21 loss to Briarwood Christian in the Class 5A semifinals last season.

Craft completed 26-of-41 passes for 248 yards and two touchdowns, while also throwing four interceptions, in the final game of his high school playing career. Senior tight end Canon Smith reeled in four passes for 60 yards, including two touchdowns in the second half.

Senior running back Matthew Furuto rushed for 67 yards on 14 carries in the loss.

After allowing the Hartselle offense only four yards in its first series, Craft tossed his first pick in the game. The interception led to an eight-play, 40-yard scoring drive for the Tigers, which was capped with a 32-yard field goal by Gavin Marsh with 4:33 remaining in the opening quarter.

Following a Briarwood Christian punt late in the first quarter, Hartselle responded with a 13-play, 78-yard scoring drive and took a 10-0 lead following a 4-yard touchdown run by Deacon Aldridge and an extra point by Marsh with 9:21 left in the first half.

A 39-yard drive by Briarwood Christian ended near midfield following Craft’s second interception in the second quarter. The two teams traded punts late in the first half and the Tigers carried a 10-0 lead into the locker room at halftime.

The Lions cut the Hartselle lead to 10-7 following a nine-play, 64-yard scoring drive to open the second half. Furuto had separate runs of 10 yards and 11 yards for a pair of first downs before Smith reeled in a 26-yard pass from Craft to set the Lions up deep in Hartselle territory.

Smith capped the drive with a 14-yard touchdown reception from Craft and Benson Mulvaney added the extra point, which left the Lions trailing by three points with 8:28 remaining in the third quarter.

The Tigers immediately responded with an eight-play, 80-yard scoring drive and took a 13-7 lead with 5:08 left in the third quarter following a 39-yard field goal by Marsh.

The Lions’ offensive momentum stalled on their next possession when Craft was stopped for no gain on a third-and-1 near midfield, which forced a punt on fourth down. Briarwood Christian’s next possession also ended in a punt, which was followed by Craft’s third pick in the game two possessions later.

Meanwhile, Marsh’s 41-yard field goal attempt curved just inside the right upright with 8:20 remaining in the game to push the Tigers’ lead to 16-7.

The field goal turned out to be the difference in the game. Craft’s 8-yard touchdown pass to Smith with 2:21 left in the game and Mulvaney’s extra point cut the Lions’ deficit to two points instead of giving Briarwood Christian a one-point lead.

The Lions forced Hartselle into a three-and-out and a punt to get the ball back with just under one minute remaining. However, senior wide recevier Michael Lathem got tripped up on a deep pass and Craft’s attempt with just a few seconds remaining was picked off to seal the Tigers’ victory.