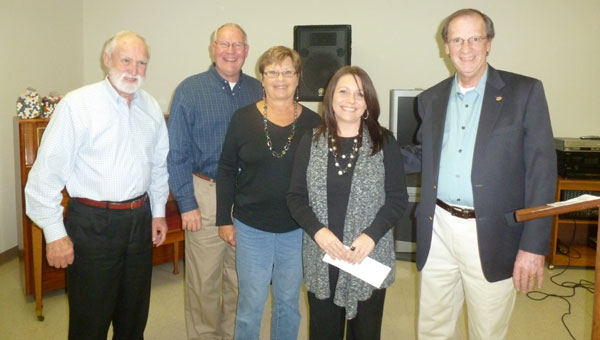 Bob Wanniger, Dale and Mary Neuendorf, and Jaime Echols, members of the Chelsea Kiwanis Club, are thanked for their help with the Shelby County Fair by Columbiana Kiwanis President Doug Schofield at the Kiwanis 2011 Awards Program. (Contributed)

The Shelby County Fair ended Sept. 24 but not for the Columbiana Kiwanis Club, which annually has produced the event for 62 years.

The culmination and highlight of the club year’s hard work was the Kiwanis 2011 Awards Program.

Proceeds from the fair were given back to south Shelby County in donations to schools, service organization and youth groups at an awards dinner Nov. 17 held at Antioch Baptist Church.

The Shelby County Fair is the real deal, a not-for-profit event that gives back more than $35,000 to our community — affordable fun and philanthropy combined in one event.

Kiwanis President Doug Schofield thanked major sponsors whose support was vital to the success of the fair: Bryant Bank (Billy Jones, president) and Columbiana Piggly Wiggly (Wayne Johnsey, general manager). Schofield recognized and thanked the Chelsea Kiwanis Club for its assistance and volunteer help, which is critical to the fair’s success. He also recognized and thanked the City of Columbiana and Shelby County Commission, represented by Commissioner and Kiwanis member Corley Ellis, for their invaluable support.

The production and logistics of the fair was complicated, especially parking. More than 4,239 volunteer hours were given by members of the Columbiana and Chelsea Kiwanis Clubs, Boy Scout Troop No. 560, SCHS Key Club, Columbiana girls softball teams, Bethel Baptist Church youth group and others. Without the help of these organizations who provide needed volunteers and the School of Technology, which provided necessary parking space, the fair would not have succeeded.

Schofield presented thank-you donation checks to each of these groups.

The Kiwanis Club’s main focus is support of education for our youth. Representatives from 17 schools received checks at the awards program.

A form was given with each check, asking the school to inform Kiwanis on how their donation would be used.

Your attendance to the Shelby County Fair did that – a no-strings gift of funds given to our cash strapped schools to be used as needed.

Family friendly fun and charitable giving – the Shelby County Fair and the Kiwanis Club are the perfect mix.

Joan and Milton Pointer are opening their home on Shelby County 30 for the Tour of Homes to celebrate the... read more