Calera too much for rival Shelby County 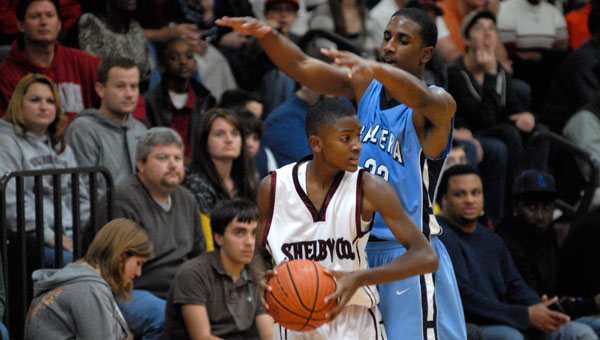 Shelby County learned that lesson the hard way in a 80-57 loss to rival Calera in front of a packed house Nov. 29 at Charles Dickinson Gymnasium.

Haynes was his usual self with his slashing drives to the basket, long-range bombs and rim-rattling dunks on his way to 15 points in the win.

At the same time Clark was on fire from 3-point range and Adams was dominant inside against the Wildcats, who had few answers defensively. Clark led the Eagles  (4-1) with 28 points, while Adams chipped in 13 points.

Burdette knows what he’s got in his starting lineup with four returning starters. He’s looking for depth off the bench.

“We’ve got to find guys number six, seven or eight,” Burdette said. “We’ll even play nine or 10 if we can.”

Tyler Madison led Shelby County with a game-high 35 points in the loss.

“He’s one of the few veterans we have,” Brown said. “We’re glad to have him on our team. He does a lot of good things for us.”

Madison gave the Wildcats their only lead in the game, 3-0, following his 3-pointer in the opening minute.

Calera responded with a 25-4 run, which included back-to-back 3-pointers by Clark, to end the first quarter.

The Eagles extended their lead to as many as 23 points in the second quarter. A layup by Haynes with 24.3 seconds remaining in the first half gave Calera a 44-21 advantage before Madison drained three free throws after being fouled on a shot at the buzzer from near midcourt.

The Wildcats opened the third quarter with a 4-0 run, but the Eagles kept their lead in double digits the rest of the game. Haynes drained a 3-pointer with less than 30 seconds remaining in the quarter to give Calera a 68-49 lead.

Shelby County opened the fourth quarter with an 8-0 run, capped by a 3-pointer from Pennington. Brown said he was glad to see his team keep fighting despite the deficit.

“I’m proud of our guys for hanging in there and fighting,” Brown said. “Our kids played really hard.”

Haynes verbally committed to play basketball at Tennessee Tech University but didn’t sign a national letter-of-intent during the NCAA early signing period. Tennessee Tech assistant coach Russ Willemsen was in the gym for the game against Shelby County.

Haynes said he plans to sign in the late signing period in April.