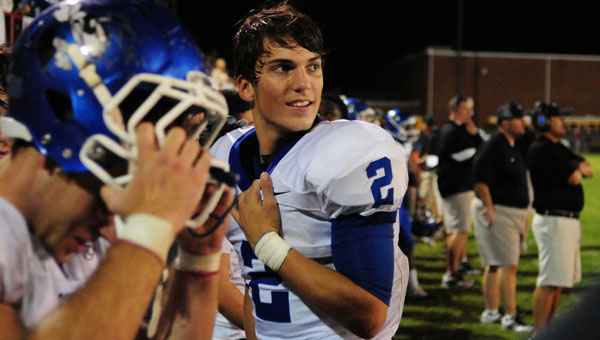 Chelsea High School senior Jake Ganus could see the writing on the wall.

As the 2011 football season winded down, Ganus knew he might not get an opportunity to play for coach Neil Callaway at UAB after verbally committing to the school in July.

Despite Callaway’s resignation Nov. 27, Ganus said he is still verbally committed to play for the Blazers next fall.

“I kind of knew it was coming,” Ganus said. “I was upset at first because he was the coach that recruited me, but I’m really excited to see who the new coach is.”

Ganus, a 6-foot-3, 180-pound quarterback and defensive back, was recruited to play safety for the Blazers by Callaway and his coaching staff.

One coach who Ganus hopes remains on the new coaching staff is recruiting coordinator Tyson Helton, who played a key role in landing four recruits from Shelby County in the Class of 2012 in Ganus and Briarwood Christian quarterback Ben Craft, along with Spain Park defensive backs Devon Brown and Destin Challenger.

Ganus said Helton told him he plans to continue coaching at UAB if the new head coach keeps him on staff.

Ganus said all of the Blazers’ recruits he has spoken with since Callaway’s resignation remain firm in their verbal commitment, including Craft, one of his best friends.

“They’re all positive about it,” Ganus said.

Callaway resigned following a 3-9 record during the 2011 season. Callaway finished with a 18-42 mark during his five seasons at UAB. The school did not achieve a winning record in a season and failed to play in a postseason bowl game during Callaway’s tenure.

The current UAB roster includes one Shelby County product. Former Spain Park running back Tamar Mickens just completed his first season with the Blazers after redshirting as a freshman in 2010.