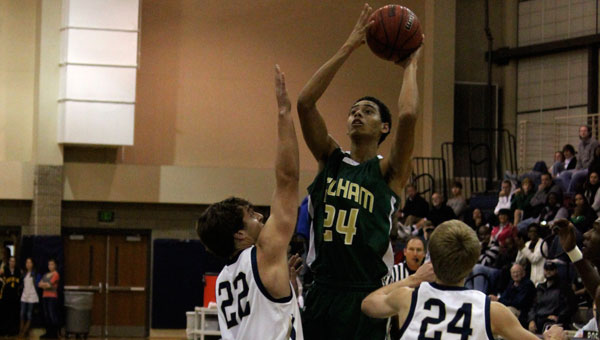 NORTH SHELBY — The Nov. 29 match-up between Briarwood Christian and Pelham High School came down to a 3-point shot at the buzzer — twice.

After Briarwood senior Jason Laatch hit a wild 3-pointer at the buzzer to send the two squads into overtime, Pelham senior Trey Hurst took notes. But Hurst’s was for the win.

“I was just doing what coach drew up,” Hurst said. “I just stuck with the plan. I was a little nervous when I let it go, but it looked good when I watched it. It felt good.”

The game started neck-and-neck, and remained that way until the final seconds, before Jason Laatsch hit a 3-pointer to give Briarwood (3-2) a 11-8 edge to close out the first quarter. The Panthers answered with a 10-2 run to start out the second period. With just more than six minutes remaining in the first half, Pelham tied up the game 13-13 after forcing back-to-back turnovers as a result of its vicious half-court press and capitalizing with a 3-pointer and layup from junior Willie Simpson.

“They’re very good at that,” Briarwood head coach Chris Laatsch said. “We talked to many coaches in the county, and that’s what they’ll tell you, that their 1-2-2 is really good. We worked against it, practiced against it. We handled it well at times, but we had some lineups that struggled with it. They do a great job in it — they don’t leave you a lot of holes.”

Continued defensive pressure allowed Pelham to close out the first half with a 17-21 lead, and the Panthers maintained control well into the final quarter. With 1:24 remaining in regulation, Lions senior Raymond Woods fought for a clutch layup to cut the Briarwood deficit to two points. As Briarwood began fouling for possession, Hurst hit a free throw to extend the Panthers’ lead to 34-37 with 25 seconds remaining in play, but Jason Laatsch wasn’t ready to go down as he hit a 3-pointer as time ran out to tie up the game and send the two squads into overtime.

“The play was for me to try to get to the rim, but they shut that down,” Jason Laatsch said. “I noticed time was running out. I pitched it to Devin (Bowman) for the 3, but he wasn’t open, so he drove, kicked it out to me, and I just had to throw it up there at the last second. That’s probably the most crazy shot of my career.”

With 1:25 remaining in extra time, the two were locked in a 39-39. Pelham took a timeout with 10.8 seconds remaining, and Pelham head coach Joel Floyd was ready to steal the win.

“We had several options on the play, and that was the last option if everything else was covered, and everything else was covered, so that was open,” Floyd said of Hurst’s game-winning shot. “He’s done a great job this year. He had a concussion at the beginning of the season, so he’s been kind of working his way back, and I’m very excited for him.”

“Their pressure created a lot of turnovers, Chris Laatsch said of his Lions, who turned the ball over 21 times. “We had way too many turnovers in the first half, way too many in the second half, missed way too many free throws, so we had opportunities. I was pleased to see how we handled their defense. We got opportunities, we really just didn’t finish it.”