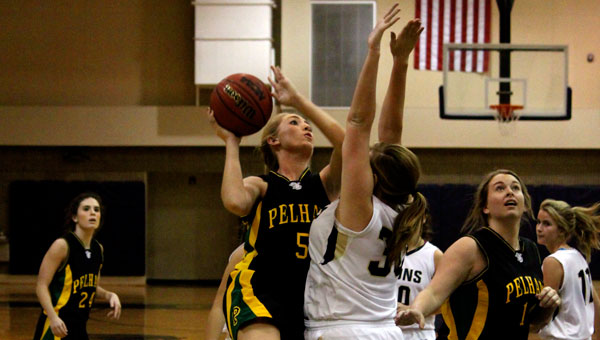 NORTH SHELBY — Despite a quick seven-point run to start the game, the Briarwood Christian School girls’ basketball team dropped the reins as it fell to Pelham 39-37 at home Nov. 29.

“It was a lot fun at first because we were making everything and were just really on, and then I don’t know what happened the second quarter and the rest of the game,” said Briarwood senior Cara Medders, who totaled a team-high 17 points. “We were just off for some reason. I think we got a little unlucky and just couldn’t make. It was just one of those games where it just wasn’t going our way.”

Medders and sophomore Hannah Wainwright got the offense moving for the Lions as they each hit a 3-pointer early in the first quarter, and a free throw from senior Sarah Ann Johnson gave Briarwood its 7-0 lead.

“We were 2-for-8 from the free throw line to begin with, and then they hit three quick 3’s,” Pelham head coach Jeremy Simpson said. “They were contested, but (Briarwood) just came out shooting well, and we didn’t.”

Pelham eventually found some rhythm from the line, cutting the deficit to 10-5 going into the second quarter. Briarwood found the basket only once more before the half as Pelham began continued chipping away at the Lions’ lead.

“We hit a couple shots to start which we proceeded then not to do anymore after that,” Briarwood head coach Jim Brown said “For some reason, they went to the zone. The zone seemed to trouble us a little bit, and we proceeded to go through long stretches without being able to score. We really just didn’t shoot very well in the first half.”

After Pelham senior Kaitlin Bunch hit a 3-pointer in the first minute of the third quarter, the two squads remained neck-and-neck, trading 10 scoring runs to enter the fourth quarter tied at 24-24. With just more than two minutes remaining in play, Bunch pulled the Panthers ahead 33-31 with another 3-pointer, and Pelham never trailed again.

Despite a desperate effort on the part of the Lions, the clock ran out before their efforts paid off, and the Panthers walked out of the Lions’ den with a win.

“Briarwood is a tough place to play,” Simpson said. “They have an atmosphere that suits their game. They want it slow, they want to lull you to sleep, so to speak, and then they hit you when they’re ready. If you have the mental toughness to fight through it, then it is always a good win.”

“We could have played a lot better, and I wish we had won by more, but we came out with a win,” Kepler said. “That’s all that matters.”