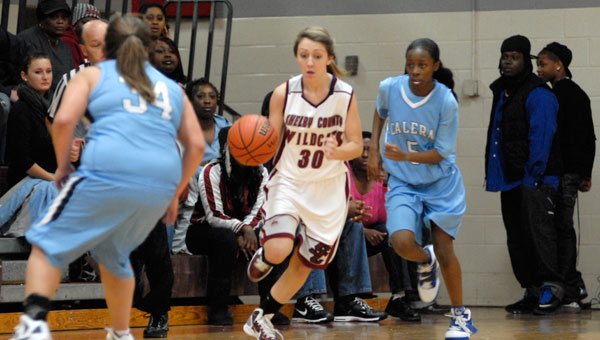 Despite a 7-0 start to the season, the Wildcats were sitting at home following a loss in the Alabama High School Athletic Association Class 5A, Area 7 semifinals.

Following a 57-48 win over rival Calera on Nov. 29 to improve their record to 6-1, Steed said the Wildcats’ focus remains on the long run.

“We’re off to a great start,” Steed said. “We’ve got to roll it over through area play.”

Aulicia Nunn led the Wildcats with 24 points in the victory.

“(Nunn) has stepped up and become a leader,” Steed said. “I’m really proud of the way she’s played.”

Tyesha Haynes led Calera with 24 points in the loss.

Johnson grabbed an offensive rebound and scored a basket with less than one second remaining to give Shelby County a 14-9 lead at the end of the opening quarter.

Haynes drained a 3-pointer with 1:40 left in the first half to tie the game at 19-19 before Shelby County closed the second quarter with a 7-1 run. Brown drained a jumper from the free-throw line at the buzzer to give the Wildcats a 26-20 lead at the break.

Calera opened the third quarter with a 13-2 run, which was capped by a layup from Haynes, to take a 33-28 lead with 1:43 left in the quarter. However, an offensive rebound and basket by Johnson with five seconds remaining capped a 6-1 run by the Wildcats and tied the game at 34-34 heading into the fourth quarter.

Shelby County opened the fourth quarter with a 6-0 run. A layup by Nunn with 4:21 remaining in the game gave the Wildcats a 46-38 lead.

Calera cut the deficit to three points, 50-47, following a layup by Haynes with 1:35 remaining, but two free throws from Nunn in the final minute sealed the victory for the Wildcats.

Calera coach James Knowles said the Eagles will be much better as the season progresses.