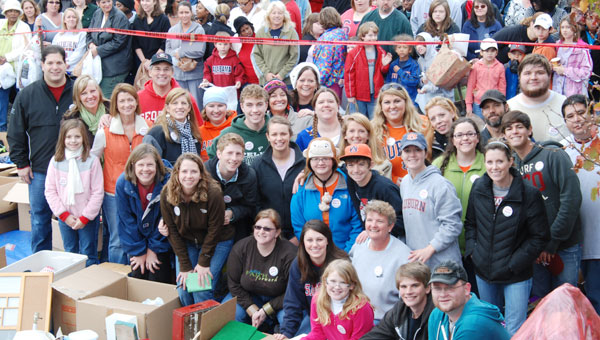 After witnessing the streets of their Alabaster neighborhood lined with dozens of vehicles and their yard and garage filled with hundreds of locals in need last year, Cassidy Nelson and her husband, Ben, knew they had outgrown their original venue.

“I think we had about 500 people come the first year. Last year, we had more than 2,000 people,” Cassidy Nelson said. “The streets were packed with cars, and it was actually creating traffic problems.”

Two years ago, the Nelson family worked with several other local volunteers to organize the city’s first “Garage Giveaway” at their house on Berryhill Lane. During the event, the volunteers give away donations of everything from furniture to clothing items and toys to anyone who needs them.

After the exponential growth in attendance from 2009-2010, the event organizers began looking for a larger venue to host the giveaway for 2011.

“We just put it out there that we were looking for a larger space, and Regions Park offered us everything we needed,” Cassidy Nelson said. “All that space is going to allow us to be a lot more organized than we have been in the past.”

During this year’s event, which will be held at Hoover’s Regions Park from 10 a.m.-2 p.m. on Dec. 3, volunteers will set up the donated items much like a large yard sale.

“Everything will be roped off until 10 a.m., and then we will let everyone go and pick out what they need,” Cassidy Nelson said, noting the giveaway is designed for families in need, but is open to everyone.

“We discourage greedy behavior. These items were donated by families to help meet the needs of other families. Please be grateful and not greedy,” she said.

This year, the event organizers will continue to host the “penny for your thoughts” table.

At the table, volunteers offer those at the giveaway a penny to hear their stories and learn about their needs. The volunteers then work to link those in need with charitable organizations throughout the area.

“Our favorite part is that the community comes together to help the rest of the community,” Cassidy Nelson said. “Some of the volunteers don’t even know each other. Everyone just wants to help out however they can.”

For more information about the event, visit Thegaragegiveaway.com.

Kids shop for family at VES