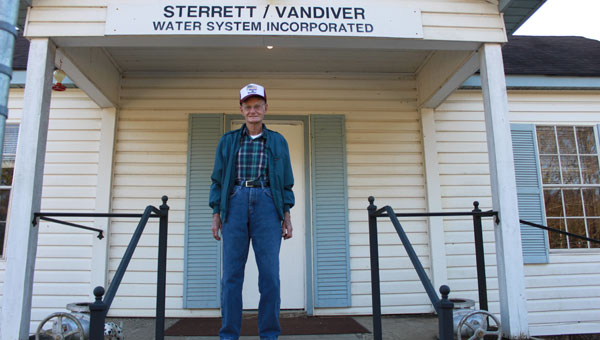 STERRETT – Carlton Bearden has watched the Sterrett community grow for the past 50-plus years, and after serving his community through the Sterrett-Vandiver Water System, the 90-year-old finally has decided to retire.

Bearden was born in the Vincent area, but moved to Birmingham with his wife. The couple lived in the city for 14 years before moving to Sterrett in 1960.

According to Bearden, the area didn’t have a water board when he moved to Sterrett. The water system began in 1972, and Bearden joined the board the following year. When it began, the system had only 270 customers, but boasts more than 1,000 today. In the early days, customers paid a monthly rate of $4 per 3,000 gallons of water, while customers presently pay $23 per month.

In 1988, the water system joined with Shelby County, New London and Vincent for a water supply. The Sterrett-Vandiver area’s water supply carries too much iron for public use.

“I had white shirts when I moved from Birmingham, but a few weeks later, I had yellow shirts (from the iron in the water),” Bearden said, laughing.

A self-described “general flunky” of the water system, Bearden spent 37 years reading water meters for the water system. According to water board member Marion Watson, Bearden can read about 900 meters in a three-day span.

“A lot of people will be disappointed to not see Mr. Bearden (reading their water meters),” Watson said. “The only thing that would stop him from reading meters on the same day every month was an Alabama football game.”

Bearden, who will celebrate his 91st birthday on December 6, will retire at the end of December. He plans to spend a lot of time in his woodworking shop and harvesting honey from his 14 beehives in the spring. His three daughters and one son live in the area, as well as his grandchildren and great-grandchildren.

“I’ve enjoyed working out here all these years,” he said. “The good Lord’s just blessed me and my wife and my family. I thank him for it because without him, I wouldn’t be able to do it.”