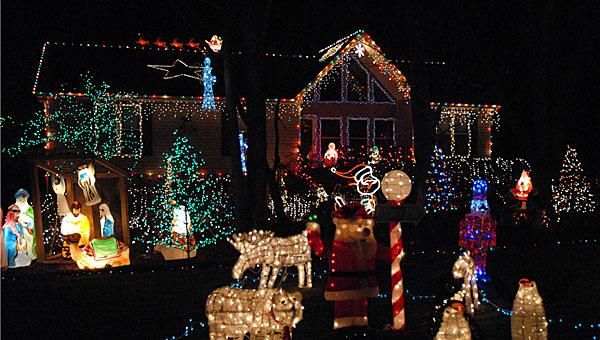 David and Barbara Phillips' house on Red Fox Drive is surrounded by tens of thousands of Christmas lights. The Phillips' house is lit from 5-8 p.m. each night. (Reporter Photo/Neal Wagner)

When Barbara Phillips and her husband, David, heard the number of lights placed on Clark Griswold’s house in the movie “Christmas Vacation,” they knew they could do better.

Although the family, who live at 12 Red Fox Drive off Shelby County 35, began decorating their house for Christmas in 2003, the display reached another level in 2006.

“We started out wanting to exceed the Griswolds’ lights from Christmas Vacation,” Barbara Phillips said with a laugh. “I think they said they had 20,000 in the movie. We had 52,000 lights in 2007.”

After the economy began sagging in 2008, the family cut back their display slightly, but have been building it back up during the past few years. This year, the Phillips said they hope to be back at full strength when they are done setting up.

“We’ve got a lot of it up now, but we should have everything up after this weekend,” Barbara Phillips said on Dec. 1. “The night before last, I heard a kid yell ‘I love your Christmas lights.’ I couldn’t even see the car, because the front yard was so bright.”

This year, the family’s decorations include everything from a 10-foot wreath over the garage to a Santa Claus and sleigh and a large nativity scene. Two 12-foot Christmas trees also illuminate the area around the house, and Barbara Phillips said she would one day like to build a giant star much like the one on top of the mountain in the Weatherly neighborhood.

To keep up with the power demand, David Phillips a few years ago installed 15 circuit breakers and several power outlets in the front yard.

“When we really started decorating like this in 2006, our breaker box was so hot you couldn’t even touch it,” she said. “So he installed all of those circuits just for the Christmas lights.”

Barbara Phillips said the tens of thousands of lights and decorations usually bring a hefty December power bill. To keep the family from draining their bank account during the Christmas season, they have their power bills averaged out over the year.

“We are paying about $300 a month to take up the slack from Christmas. We have a summer power bill year-round,” Barbara Phillips said with a laugh.

Some of the family’s friends in the past have encouraged the Phillips to take up donations to help pay the power bill.

“We don’t want to do that. I think it would be tacky,” Barbara Phillips said. “We just do it mainly for the kids. We love to see the amazement in their eyes when they see it.”