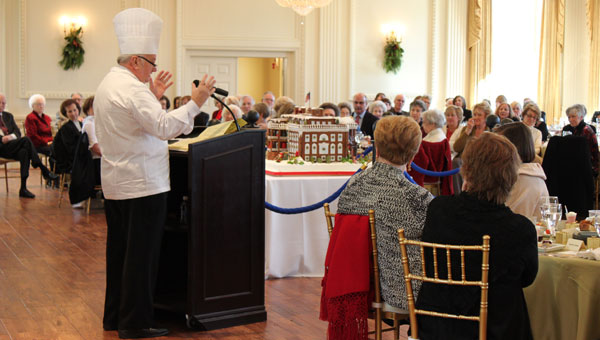 Mesnier, who was born in Bonnay, France, was the longest tenured chef to ever serve in the White House, said American Village Founder Tom Walker. In 2004, the chef retired from his presidential duties and started writing books and touring the country.

For $100 per ticket, supporters of the American Village had the opportunity to taste eight desserts created by Kathy G and Company catering from Mesnier’s own recipes. Mesnier also create a miniature White House from gingerbread to present to the American Village.

“I’ve always heard of southern hospitality,” Mesnier said, “and I got a real good dose of that. People talk to you and smile at you; that’s not the case in Washington.”

After developing a resume full of high-class restaurants in London, Bermuda, Paris and the United States, Mesnier was offered the pastry chef job in the White House. He turned the job down seven times because he loved his executive pastry chef job at the Homestead Resort in Hot Springs, Va.

When he was invited to tour the White House in 1979, First Lady Rosalyn Carter “opened her arms and called me by my first name,” Mesnier said. “After a 20-minute meeting, I had the job.”

One of the desserts offered to guests was a chocolate chip cookie Mesnier developed especially for First Lady Barbara Bush.

“Mrs. Barbara Bush would do many lectures to children, and she said, ‘I want you to make a special chocolate chip cookie and give them to the children as they leave.’ President Bush had a great sweet tooth. He would come before the children and put (the cookies) in his pocket,” Mesnier said, laughing.

To prepare for Christmas in the White House, Mesnier said he would make half a ton of fruit cake in June and more than 20,000 pieces of unbaked cakes and cookies to freeze for the holidays. For President and Mrs. Clinton, he created gingerbread replicas of the houses in which they were born.

As for the American Village, Mesnier said he felt at home stepping into the village.

“The American Village blew me away,” he said. “I love anything to do with American history. It’s the most fascinating country on the face of the earth.”

The Barrow family hopes to open the Mooyah flagship restaurant ont he U.S. 280 cooridor in spring 2012. (Contributed) By... read more