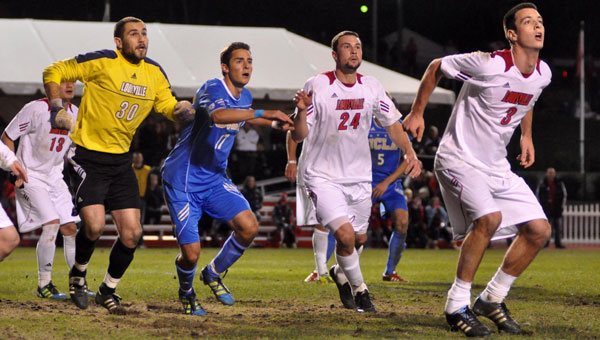 Hoffman is one of 15 semifinalists for the prestigious Missouri Athletic Club Hermann Trophy, NCAA Division I men’s soccer’s equivalent of the Heisman Trophy, and is two games away from leading UCLA to a national championship in the College Cup.

“(In 2008,) that seemed like such a huge leap from playing for Birmingham United,” said Hoffman, now a junior at UCLA. “It’s been a whirlwind and a dream come true. I’m trying not to get too caught up and just enjoy playing.”

The dream will play out this week at Hoover’s Regions Park, only 14 miles from Hoffman’s home. The UCLA Bruins will meet the Univeristy of North Carolina in the NCAA semifinal Friday night at 7:30 p.m. A win will send them to the championship game Sunday at 3 p.m. against either Creighton University or UNC-Charlotte.

“When I first came out to UCLA I thought my playing days in Alabama were over … It seems like destiny to be playing in the Final Four,” said Hoffman. “Playing (in Hoover) will definitely be a huge home field advantage not only for me but the entire team. I think there will be a massive amount of people come out and want to see UCLA do well.”

UCLA (18-4-1) clinched its first College Cup bid since 2006 Saturday night when it avenged a 2010 Elite Eight loss at the University of Louisville, 1-0, in double overtime. The win sealed a preseason promise Hoffman made to his head coach, Jorge Salcedo.

“At the beginning of the season Chandler came to me with this smile on his face and said that he was going to put this team on his back to get to the College Cup. He absolutely did,” said Salcedo. “Chandler has scored as many goals individually that UCLA has had in the past 20 years. We’re going to the College Cup as a team, but Chandler really put us on his back and helped us get there.”

Hoffman, who scored 121 goals in four seasons at Oak Mountain, has scored 24 goals in his last 29 outings at UCLA since returning from a broken leg last November. That includes 18 goals in 23 games this season and a program-record four multiple-goal games. He led the PAC-12 in goals through the season en route to a team championship and all-conference honors, and will enter this weekend as the leading goal scorer among players in the College Cup. The success has helped project him as a top-12 pick for the Major League Soccer Draft in January 2012.

“To see how well he has done, has just been a blessing. I can’t wait to see what God has in store for him. You enjoy each day that comes along and are thankful for the things that have happened,” said Hoffman’s father. “We’ve been talking about (the College Cup) for about 16 months. It seemed so far in the distance, and now it’s real. They’re going to be here, playing in the College Cup where we were sitting and watching a few years back. It’s awesome that no airline tickets are required.”

And while Hoffman has been tearing it up on the soccer field, he’s also been steady in the classroom, majoring in communication studies with a 3.79 GPA. A 2009 valedictorian at Oak Mountain, Hoffman was named a Second Team Academic All-American on Friday by vote of sports information directors across the nation. He’s the third UCLA Bruin to receive the honor.