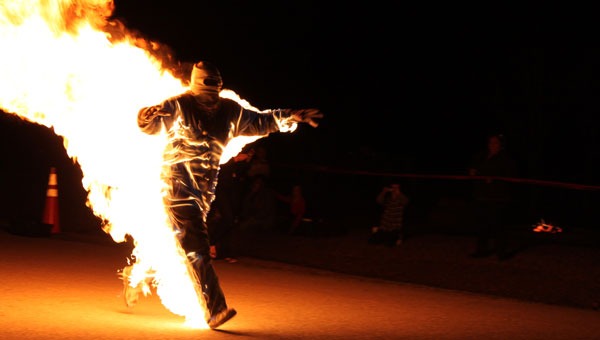 CHELSEA – King’s Home was full of activity as the organization kicked of its Kampfire for the King event on the afternoon of Dec. 4.

The event offered a vast array of activities, including music from Disciple, Matt Pitt of The Basement, Carson Bruce, Groove Daddy, Emily Herring and Act of Congress.

Professional bass wrangler Randy Howell, a spokesman for King’s Home, raffled off a brand new fishing boat for $100 per ticket. All of the proceeds went to King’s Home.

Ted Batchelor broke the world record for the longest full-body burn. The previous record was 393 feet and 8 inches, and Batchelor crushed the record by running 492 feet while aflame.

Batchelor, 53, has armed himself with the protective gel and layers of cotton and run while on fire about 150 times since he was 17 years old.

“I was bet in my hometown in high school to dive off a cliff on fire,” Batchelor said before making the record attempt. “I had a dream like that and wrote a poem about it. I was challenged in front of a group of boys to do it, so I had to.”

Batchelor said he wore a French beret, a cape, moccasins and denim on his arms during his first attempt.

The Chelsea Fire Department was on hand in case Batchelor needed medical assistance after his run.

Batchelor, after being extinguished, walked away without any need of medical attention.

Kampfire for the King raised money for King’s Home, which holds the mission of serving Christ by caring for youth, women and mothers with children at risk.