Program has legacy of selfless sacrifice and service 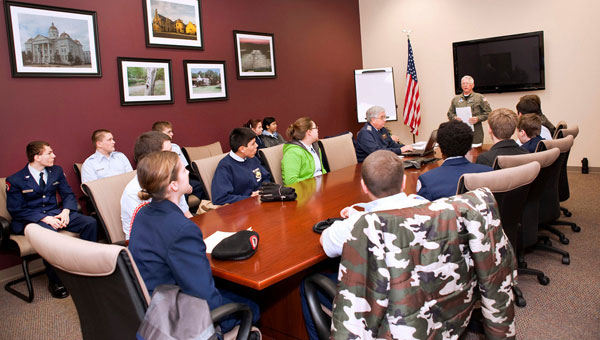 Civil Air Patrol, the official auxiliary of the United States Air Force, is a non-profit organization conceived in the late 1930s when more than 150,000 volunteers with a love for aviation argued the need for an organization to use their flying skills for America’s defense. The organization formed Dec. 1, 1941, a week prior to the bombing of Pearl Harbor.

During World War II, CAP volunteers used their own airplanes to patrol coastlines for German U-boats and perform life-saving missions. Today, members use aircraft equipped with the most advanced technologies available for search and rescue.

“The organization has three primary missions: aerospace education, cadet orientation and emergency services. They perform search and rescue missions, respond to natural and man-made disasters, assist in humanitarian missions along the U.S. and Mexican border and are involved in counterdrug reconnaissance.

Jerry Sharp of the Central Alabama Senior Squadron will speak at Calera Chamber of Commerce’s January luncheon in recognition of CAP’s 70th anniversary.

“Our unit is likely to look for lost or overdue aircraft, lost hikers, assist in transporting supplies to disaster areas and take before and after photos of disaster areas,” Sharp said. “We also support the counterdrug program run by the U.S. government.”

“The cadet program offers young people 12 through 21 an aerospace education program that includes leadership training and physical fitness. Though our unit doesn’t have one, we give cadet orientation rides.”

The cadet program is offered by the Chilton County Composite Squadron. They recently won the sixth annual Iron Man competition in which a six-person team competes in physical fitness, drill, inspection, aerospace and leadership knowledge.

Speaking for the squadron, Maj. Gary Ernest said, “Civil Air Patrol is a great opportunity for both young and old — my son and daughter are involved. They have trained and participated in several search and rescue missions including the tornado disaster relief, lost refueling hose from a C-130 and a missing aircraft in Demopolis. Currently they are competing in Cyber Patriot, the premiere national high school cyber defense competition.”

Over the next several months the cadets will launch model rockets, conduct emergency services training involving first aid, radio communication and mapping skills and will train to compete in the Alabama wing cadet competition. For information about the cadet program contact Ernest at 280-1501 or visit Gocivilairpatrol.com.

Are you in good hands?