Farming in the Kingdom, past and present 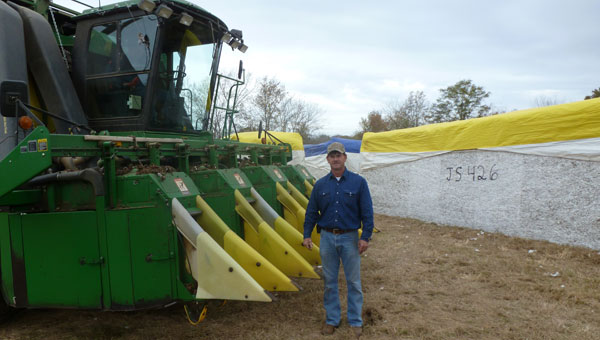 Jerry Spates farms the Poe land in the Kingdom today. Spates is in front of his cotton picker and recently baled cotton module. (Contributed)

The farming community southeast of Columbiana along Highway 28 is known as the Kingdom. Well-known families have lived in this area since the 1800s: Anderson/Poe; Mooney/Blankenship; Horton; Perkins; Mason; Farr; Talton; Smith; Starnes; Fenn; Martin and others.

Marie Lasher (Atlanta) and Maureen Mayfield (Chelsea) are great-granddaughters of Shelby County pioneers Mittie Anderson married to Jessie Thomas Poe. Anderson encouraged her husband to settle in the Kingdom where her parents lived. Her brother owned Andersons Restaurant located where Anita’s Creations is today in Columbiana.

The sisters are the daughters of Virginia Poe and Wilson Minor and grew up in the “city,” Columbiana. Their maternal extended family farmed and “lived off the land” in the Kingdom. Grandfather Poe farmed with mule and plow in the early 1900s. Four generations later, the land is still being farmed.

“When I was young, I thought the Kingdom was a magical place,” said Mayfield. “I remember the peddler man stopping with his wagon full of magical things like fabric to make a dress. Now I ask you, who sees a peddler man except in a movie like Oklahoma?”

Jerry Spates of Harpersville is a fourth generation Shelby County farmer who farms the Poe land today. Spates’ great-grandfather Thomas moved to Harpersville in the 1800s from Chambers County and started the Spates farming tradition that has been carried on by grandfather Elvin, father R.V., and now son Jerry.

“I have been driving a tractor since I was 11,” said Spates. “I work from dawn to dark. Each day is a learning process and is never the same day twice.”

Spates farms more than 1,000 acres of land in cotton, soybeans, wheat, hay and some cattle. He owns his own machinery and has lived off the land as his forefathers did so many years ago. The massive cotton picker typically bales 15 bales of cotton, each bale weighing 500 pounds, in one module. Spates usually picks between one to two bales of cotton per the 700 acres of cotton he plants.

“The Lord has blessed us,” said Spates. “It is very satisfying to look back over all you did, know you did the best you could, and trust in the Lord for the rain when you need it.”

Farming in Shelby County continues in the 21st century. Whether by mule and plow or multi-ton cotton picker, the land remains the same and the men who sweat and labor to make it work.

Bob Wanniger, Dale and Mary Neuendorf, and Jaime Echols, members of the Chelsea Kiwanis Club, are thanked for their help... read more