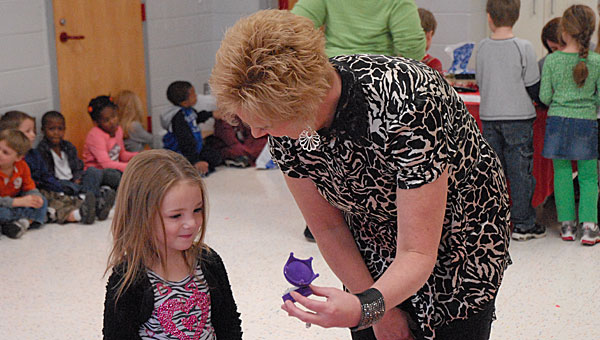 Holiday tunes filled a couple of classrooms Dec. 7 at Meadow View Elementary School as several groups of students knocked out most of their Christmas shopping in a single day.

PTO parents manned the school’s pair of Santa shops as a handful of kindergarten, first- and second-grade classes purchased items of all kinds for their friends and family members.

The shops offered everything from glow-in-the-dark slime to jewelry boxes and football fan items.

“The slime is a good one. The kids buy a lot of that,” said MVES parent Allison Griffeth, who was manning the cash box at one of the shops. “The little tool sets for dad and the heart necklaces for mom are also real popular.

“And I think everyone in Alabaster is going to have something Alabama or Auburn,” Griffeth added.

Most of the items in the shops were provided by the Alabaster-based Big Dog Trading Company, which sold the gifts to the school at cost. All profits generated by the sale will be collected by the PTO and used to buy classroom items for teachers.

The gifts at the Santa shop ranged from 40 cents to $9, and quickly brought smiles to students’ faces as they entered the room.

“They love it. They think they are doing some serious shopping in here,” MVES kindergarten teacher Michelle Colburn said as her class shopped. “We couldn’t get anything done in class this morning because they were excited about coming in here.”

The students each filled out a list of loved ones they were shopping for, and the amount of money allotted to each person. Working within a budget gave the kids a real-world financial lesson, Colburn said.

“We had a big lesson about money before we came here,” she said. “For instance, I said ‘If I went to the store and something cost $10, but I only had $5 in my purse, could I afford it?’

“They are quite the shoppers,” Colburn said with a laugh. “I’m going to have to take them to the Galleria with me.”

FROM STAFF REPORTS A Special Education teacher from Creek View Elementary was recently named to select group of National Board... read more