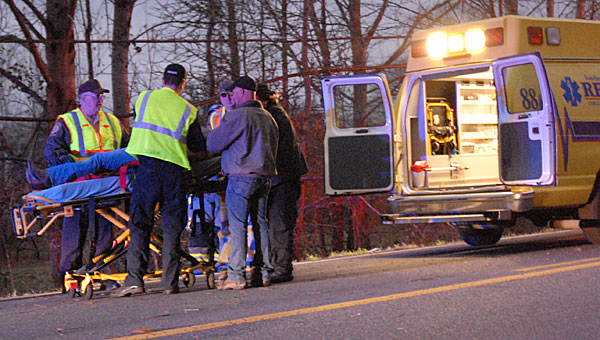 Emergency responders work to load the driver of a black Ford Mustang into an ambulance after her vehicle left the road and struck a tree on Alabama 25 near Columbiana. (Reporter Photo/Neal Wagner)

A middle-aged woman was transported to the hospital after her black Ford Mustang GT ran off Alabama 25 near Columbiana and struck a tree Dec. 7.

Emergency personnel were forced to cut the woman out of her car, but the victim suffered only minor injuries, according to firefighters on the scene.

The wreck happened at about 4:30 p.m. between Columbiana and Wilsonville near the intersection of Alabama 25 and Washboard Road. After the Mustang left the road, which has a steep shoulder, it struck a tree before violently spinning and coming to a rest in a ditch along the side of the road.

After emergency responders removed the victim from the car, she was moving her arms and conversing with paramedics.

I-65 projects could be finished in January