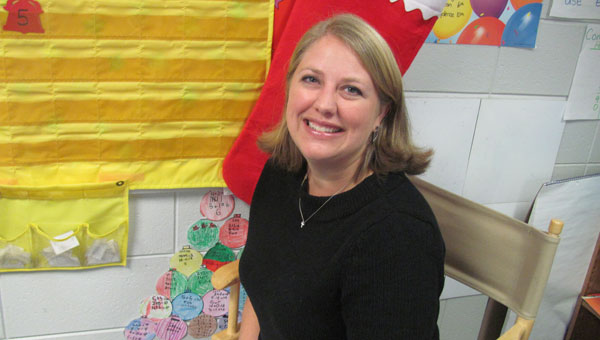 Michelle Martin, a teacher at Meadow View Elementary School, graduated from the University of Montevallo and lives in Alabaster with her husband, Rusty. (Contributed)

Martin began her teaching career at Grantswood Community School, where she actually replaced her own first grade teacher.

“I am blessed to work at Meadow View. Our atmosphere is positive, inviting and beautiful. Our administration is great,” she said.

Martin, an Irondale resident growing up, was educated at the old Shades Valley High School and then graduated from the University of Montevallo.

Martin met husband Rusty (a Pelham guy) at a mutual friend’s house, and they were later married.

After their courtship and marriage, they bought their first home in Alabaster and settled down to married life. Having family and friends over, singing for fun and going on family trips to Disney are important in their family.

In 2003, Martin knew she had fertility problems. So she began lots of tests at UAB, and then the infertility treatments began.

In 2005, the Martins were ecstatic at the birth of daughter Kylie. In the next few years, disappointment and heartbreak happened with two miscarriages. “If you haven’t been down that road, I can tell you it is very emotional,” she said.

Martin went back to the fertility specialists. Martin experienced lots of complications during her next pregnancy with John Thomas Martin being born premature, but healthy, in November of 2010.

Shortly after her son’s birth it was discovered that Martin’s ovaries were precancerous and if she had not delivered John Thomas when she did, it is highly unlikely the “cancer warning” would have been found, Martin said.

Martin’s obstetrician performed the surgery after declaring, “you must have had an angel watching over you.”

Because of what she has been through, Martin has become closer to God and is more thankful for everything she has. Watching her children grow and prosper, health and happiness and being an advocate for yearly checkups are some of her goals.

“Yes, I worship in a converted grocery store and love it,” she said.

Singing alternative rock, gospel and some (no twang) country are her musical stress relievers.

“I want to give back for all the things I have been blessed with in my life,” Martin said.

Alabaster Fire Inspector Phil Harris has been keeping the city safe for many years, and has not seen a commercial... read more