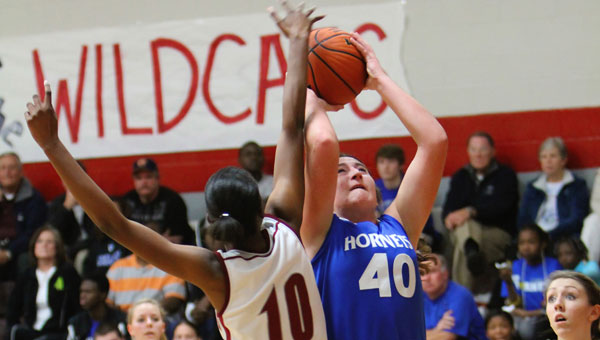 By BRITTANI MORRIS / For the Reporter

COLUMBIANA — The rivalry game between the Shelby County Ladycats and the Chelsea Hornets didn’t end without a tough fight Dec. 9.

“We’re very proud of how well our team played,” said Shelby County coach Brandi Steed. “They got down a little in the second half and were outplayed a little bit, but they came back in the end and played with enough heart to pull off a victory.”

“Our hustle helped us win,” Nunn said. “We never gave up.”

The game started out with both teams being very aggressive, said Chelsea’s Perri Lambert.

“The team needs improvement on keeping their heads in the game and keeping them in there,” Lambert said.

Lambert finished with 13 points following behind a determined Amanda Mock, who led the Hornets with 21 points.

This neck-and-neck game remained tight throughout the entire night, sending the Ladycats in the locker room with 24-13 lead at halftime.

Both teams came into the fourth quarter with one thing in mind — a win. The Hornets’ Tammy Trout sent the game into overtime with a free throw.

Going into overtime, the Ladycats came out strong with a 6-point lead, but Chelsea quickly came back. Nunn scored 1-of-2 free throws in the final seconds to help Shelby County hold off the Hornets.

“I was really proud of the way we extended it into overtime,” said Chelsea coach Wayne Trucks. “We had a lot of the momentum going our way, we just ran out of time.”