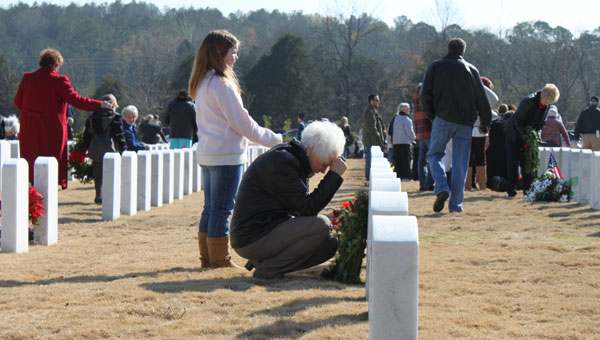 Family members laid evergreen wreaths at the gravestones of loved ones during the Wreaths Across America ceremony Dec. 10. (Reporter photo/Christine Boatwright)

MONTEVALLO – The dirge of “Taps” rang out from a lone bugle as a crowd remembered loved ones who have fallen while serving or after serving in the branches of the U.S. military.

The Wreaths Across America event was held at the Alabama National Cemetery in Montevallo on the morning of Dec. 10. Bob Barefield, chairman of the Support Committee for the cemetery, served as master of ceremonies.

“Our freedoms have not come without a price,” Barefield said to the gathered crowd. “We remember men and women who gave their lives so we can live in freedom without fear.”

Wreaths Across America is a national program in which wreaths are placed in remembrance at 500-plus locations across the nation simultaneously.

Barefield said the evergreen wreaths, which were placed at each gravesite, represent the commitment of the United States to remember the fallen soldiers.

Lt. Gen. David Fadok, president and commander of Air University at Maxwell Air Force Base, said Wreaths Across America is about remembering those who sacrificed everything.

“With each wreath laid today, we honor each of the fallen veterans and their families,” he said.

Shelby County Boy Scouts and Girl Scouts led the Pledge of Allegiance during the ceremony.

“Everyone needs to know freedom is not free, and because these people gave the ultimate sacrifice, it’s important they (children) understand from an early age,” said Mike Rocchio, a leader for Cub Scout Troop 5 in Hoover.

“It’s to remember veterans,” she said. “They’re not just put in the grave and forgotten.”

Chelsea High School guard Jake Ganus drives to the basket in the Hornets' 59-53 win over Shelby County in a... read more