Getting to know Calera’s municipal clerks 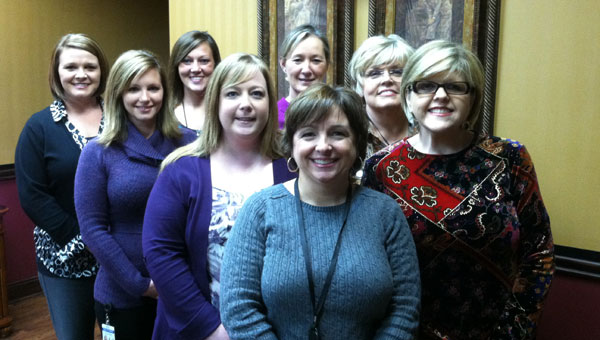 Municipal clerks are the link between residents of a community and their government. Calera’s utility bills are processed by Lisa Hawks. If you pay them at City Hall, you’ll meet Jennifer Blankenship, Katie Cannady and Carmon Leach. Michelle Hyde can help answer questions about public works and Phyllis Edwards and Tabitha Barker handle court business.

Want to open a business or build a house in Calera? Mindy Collum will sell you a business license and Tammy Smith in planning and zoning will arrange building inspections.

The city clerk is responsible for the legislative operations of the city. The city clerk has direct signature authority, and it’s required on all ordinances, resolutions and other official documents of the city. The city clerk’s office holds official records management. Connie Payton has served as city clerk since 2009. She received municipal clerk certification from the University of Alabama’s College of Continuing Studies, then continued her education to receive the International Institute Municipal City Clerk certification.

“I joined the city as a license and payroll clerk and was promoted to assistant clerk in 2007,” Payton said. “When Linda Steele retired along with former Mayor George Roy, I was appointed city clerk in 2008. My continuing education courses has given me a better understanding of city government and help prepare me for my job duties.”

The Paytons have lived in Calera for 18 years with daughter Haley, a senior at Indian Springs School, and son Daviston, an eighth grader at Calera High School. They make it a priority to be involved in activities with their children.

They enjoy camping, snow skiing and long weekends at the lake with family and friends. Daryl and Daviston enjoy hunting and fishing.

“Haley and I enjoy shopping while the boys hunt and fish,” Payton added.

Vickie Lewis, assistant city clerk, handles payroll, insurance and retirement. “I grew up in Calera, and it’s good we’re growing, but I miss the small town and knowing everybody,” she said. “Connie and I work good together, and she’s never too busy to stop to help someone.”

Program has legacy of selfless sacrifice and service