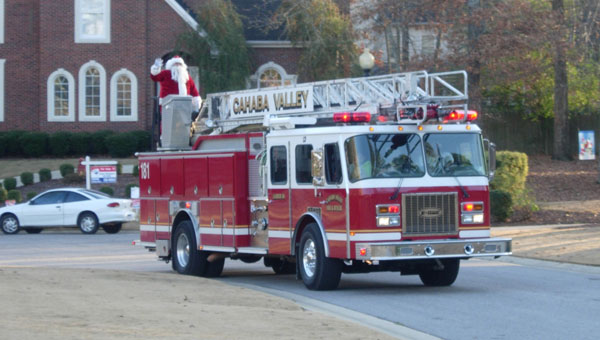 The firefighters of Shelby County are gearing up for an important task this holiday season. They are preparing to escort Santa Claus throughout the county’s many neighborhoods to make house calls to local children.

“It’s an adventure every year. We go through every neighborhood, and of course we’ll get calls in the middle of it and have to cut it short,” said Helena Fire Chief John Wilder. “It doesn’t matter if we start at 1 in the afternoon or in the morning, we still finish at 10 at night. Everyone seems to enjoy it. I know the citizens love it.”

The Helena Fire Department has carried Santa to the community on Christmas Eve for the past 20 to 25 years, Wilder said.

“We used to start around 3, but then we’d be driving around at 10 or 11 at night, and kids would start wondering why Santa wasn’t flying around the other side of the world then,” Wilder said, laughing.

Wilder said Santa’s three routes will be published in the city’s newsletter.

The Pelham Fire Department has escorted Santa through Pelham neighborhoods on Christmas Eve since 1984, Fire Chief Danny Ray said. The 2011 schedule is posted at Pelhamonline.com.

“I remember last year or the year before last, I stayed out riding around and checking on him the entire night,” Ray said. “I recall a group of kids at Ballantrae, and they were really excited about it.”

The department starts touring at 3 p.m., and while Ray leaves a light crew for any calls during the tour, the crew is backed up by the “Santa crews,” he said.

“The guys kind of dread it before it gets here,” Ray said, “but once they get started and see the kids, it’s worth it.”

Chelsea’s Santa will ride into town Dec. 17 starting at 1 p.m. The North Pole route will begin on Essex Drive and Cliff Road. The South Pole route will take Santa from Highway 69 and Highway 47. For a complete schedule, visit Shelbycountyreporter.com and search “Santa coming to Chelsea.”

“The way Chelsea’s grown, we used to do it with one truck and spend five to six hours out,” Shirley said. “Now, we’ve got two crews running good eight-hour shifts. We used to drive through just the main subdivisions in town, but now we have to pare down the streets we hit.”

The North Shelby fire crew doesn’t tour the neighborhoods on a particular day, but instead leaves the visiting up to the individual subdivisions’ requests.

“They supply the Santa, and we send the fire trucks around,” said North Shelby Fire Chief Mike O’Connor. “(We tour about) 18 or 19 subdivisions. Santa has candy and everything else. The kids love seeing Santa come on the fire truck.”

O’Connor said it’s good for the fire department to get involved with the community.

“Nothing captures the event like the look on a child’s face,” he said. “It really brings you into the Christmas spirit.”