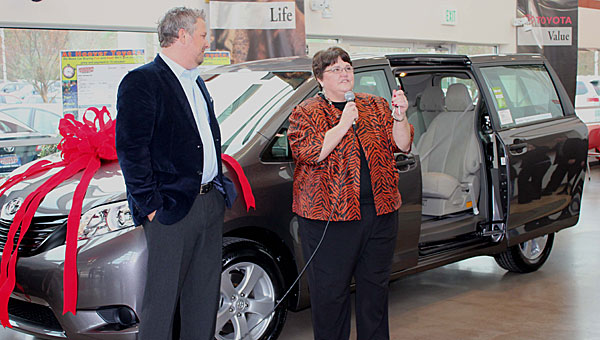 The Pelham-based SafeHouse of Shelby County will be able to better serve victims of domestic violence and sexual assault after Hoover Toyota donated a new Toyota Sienna van to the organization on Dec. 12.

In late July, the Toyota USA company announced SafeHouse of Shelby County was one of 100 non-profit organizations across the country to win a vehicle through the company’s 100 Cars for Good competition.

Through the competition, 5,000 non-profit organizations submitted applications to Toyota in early May. The list was then narrowed to 1,000 organizations, and then the top 500.

Beginning May 9, Toyota selected five organizations at random and featured them on the day’s online ballot. Voters then cast their ballots for the day’s featured organizations, and the organization with the most votes at the end of the day won their choice of a Toyota vehicle.

Before SafeHouse won on July 22, the organization’s staff was “on pins and needles,” said SafeHouse Development Director Bridgette Starr.

“Everybody was calling at like midnight saying ‘Did you win? Did you win?’” Starr said. “We actually didn’t find out for a few days, because it took them a few days to calculate all the votes we got. We had people voting for us from as far away as New Zealand.”

SafeHouse provides a confidential shelter for victims of sexual abuse and domestic violence, which sometimes houses dozens of victims at a time.

“It’s a confidential shelter, so we have to take the kids to school each day. We can’t have a school bus come by and pick all of them up,” Starr said. “We also transport women to search for jobs, and transport people to and from doctor’s appointments.

“Having this van will make a huge impact,” she added.

Presenting ‘your best you’