A disabled hope with an uninsured body 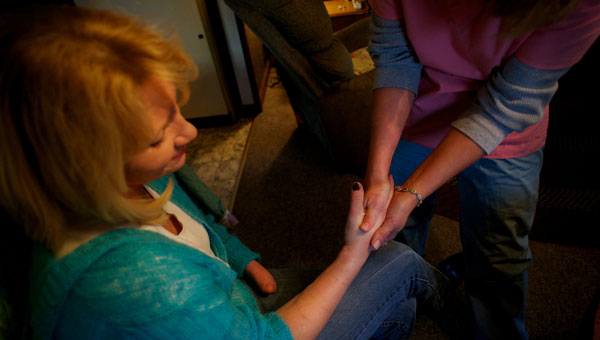 Christy Isbell massages Lynn Benton's hand in order to help relieve some of the pain from the scar tissue in Benton's arm compressing the nerves. (Reporter Photo/Jon Goering)

Lynn Benton couldn’t staunch the blood seeping from what she believed was a severed artery near her right wrist. As she tried to stop the bleeding by wrapping her arm, she looked down and saw her youngest son clutching her leg, his head bright red from her blood. Only moments before the 25-year-old nurse had attempted to open the storm glass door of her home, but when the glass gave way and shattered onto her forearm. Benton could only think, “God, please don’t let me die in front of my kids.”

Benton believes God didn’t let her die on the day of the accident because she has a purpose to complete. She raised her young sons into adulthood, worked as a nurse for almost two decades and has spent both her career and personal life serving others.

Now, however, Benton needs more help than she can manage alone. At 40 years old, she relies on family members and friends to help her financially and physically, as Benton’s story took a turn for the worse.

“My story is one in a million,” she said. “I’ve faced adversity all of my life.”

A HISTORY OF ADVERSITY

Benton, a Columbiana resident, was born with one hand, as her left arm ends in the middle of her forearm.

When she pushed her right hand through the storm glass door, Benton severed her right radial artery in two places. After surgery and three months of physical therapy, Benton returned to work as a licensed practical nurse within a month of finishing therapy because she couldn’t afford to take care of her sons when not working consistently.

“I had 142 stitches inside and out of my arm, and my thumb was in a cast,” Benton said. “I didn’t have a choice (about returning to work). It was not about me. My sons depended on me solely.”

Benton’s neurologist said she would have problems with her arm for the rest of her life from the damage from the glass door.

At that point, the pain was “just enough to notice,” and Benton could manage the pain with over-the-counter medications. 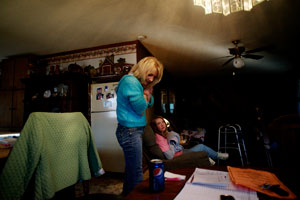 Lynn Benton describes the day her right arm broke through a storm glass door and how she tried to calm her children who were in the room with her. (Reporter Photo/Jon Goering)

“In 2007, I noticed pain and numbness in my arm,” she said. “(It affected) my fine motor skills. I couldn’t do anything repeatedly. I couldn’t find anything I could do without hurting me tremendously.”

Benton soon realized the damage in her arm would cost her the 17-year career she had built as a nurse.

She was first diagnosed with peripheral neuropathy in the summer of 2008. The pain and numbness was severe enough that Benton couldn’t hold or grasp anything. During this time, Benton decided to change jobs.

“I had to change jobs because I couldn’t nurse. It was too stressful on my body,” said Benton, who was voted “most athletic” in high school.

Her neurologist said she should try physical therapy before looking into surgical options.

At age 38, in March 2009, Benton quit working because she lacked the physical capabilities to manage a job. Leaving her job, however, meant Benton no longer could afford health insurance. With the loss of insurance, Benton could ill afford to pay for physical therapy to rehabilitate her arm.

“All of my life I’ve had to prove to people that this was not a problem,” Benton said, gesturing to her left arm, which has only small, nubby fingers and a very small palm. “It never crossed my mind this (the right hand) would be a problem.”

In terms of health insurance, she said she didn’t qualify for Medicaid because she didn’t have children at home, as they were grown. With Medicare, she was too young to qualify for any assistance. She was then denied when she applied for disability benefits.

“Disability was not my first option; it was my last,” Benton said. “I was denied almost immediately because of my age and education.

“I had to go the extra step to prove I wasn’t disabled to start with,” Benton said, referring to her missing hand. “Now I’m having to show that I am disabled. Early in my life I could have gotten on disability for being born with one hand, but my mother didn’t raise me that way.”

When the pain became unbearable, Benton began visiting emergency rooms as an alternative to a neurologist, which she couldn’t afford. 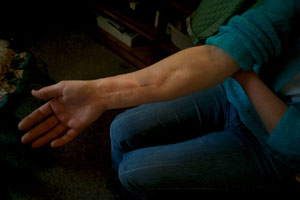 Benton's injured right arm required 142 stitches. As a result of this injury to her arm, Benton, who was born with a blighted left arm, was unable to continue working as a nurse and lost her health insurance. (Reporter Photo/Jon Goering)

Under the Emergency Medical Treatment and Active Labor Act, EMTALA, hospitals that are Medicare providers must treat emergent situations in their emergency rooms, according to Ross Mitchell, vice president of communications and government relations with the Baptist Health System.

The purpose of EMTALA is to “prevent hospitals from rejecting patients, refusing to treat them or transferring them to ‘charity hospitals’ or ‘county hospitals’ because they are unable to pay…” according to Emtala.com.

“The hospital absorbs those costs (of medical treatments) if the patient cannot pay,” Mitchell said.

With EMTALA in place, Benton was able to seek medical treatment from emergency rooms even though she was unable to pay for the visits. The visits provided Benton with renewed prescriptions for Lyrica, a medication used to relieve pain caused by damaged nerves.

Benton said Lyrica costs about $500 per month, as there is no generic option, and causes side effects such as forgetfulness and mental “fogginess.”

Today, Benton says she has about $8,000 of emergency room bills that she cannot pay in her current situation.

“You work all your life, but life has happened to you and there is no safety net,” she said. “I raised kids; I didn’t save money. I afforded them opportunities – college and a good education.

“You can’t foresee some things,” she added. “I was healthy.”

To pay for rent, utilities and other regular necessities, Benton relies on her mother and brother to foot the bills. Her mother, a 66-year-old registered nurse at Shelby Medical Center, delays retiring because she has to care for her daughter.

“It’s a time in her life when she should be leaning back and letting her children take care of her. Now she’s taking care of her 40-year-old daughter,” Benton said, raising her damaged hand to wipe away tears.

“I had always been independent. When your independence is taken away from you, it’ll take you on an emotional roller coaster you don’t want to be on. It’s horrible.”

After she was denied for disability, Benton began seeking help. She hired a lawyer, who advised her she needed medical evidence from a neurologist of her neuropathy.

“It’s hard enough to get a general practitioner to do discounts, but a specialist? A neurologist?” she said. “It was just one wall after another.”

Benton found her “personal angel” when she heard about Community of Hope during one of her emergency room visits. 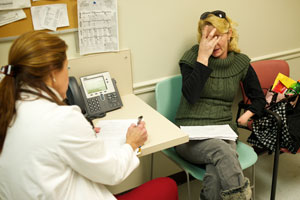 Lynn Benton holds her head in her hands while she describes the pain to Dr. Oestreich during a visit to Community of Hope. Benton had been unable to afford to fill her perscription for Lyrica, a painkiller specifically for nerve damage. (Reporter Photo/Jon Goering)

Neurologist Dr. Lisa Oestreich volunteers at Pelham’s free medical clinic, Community of Hope, and offers not only medical advice and evidence of her damaged nerves but serves as a therapist and counselor as well.

“I see her every few weeks to help manage my pain,” Benton said. “It makes a difference in my pain level, but can I go to work? No. I may have to have several surgeries to help the pain. Irreparable damage has been done to my hand and arm.”

Oestreich said Benton would benefit from surgery, as her nerves are being compressed by scar tissues.

“There are some medical management issues with her pain control, as well as her current situational anxiety depression from an illness standpoint, along with not having insurance and anxiety of her future health,” Oestreich said. “(Through) the counseling efforts at the clinic and medications, we’re trying to manage that better.

“The ultimate goal would be to get her back to the work field and have some health insurance through her employer,” Oestreich said.

Benton hopes to begin working again for a number of reasons, to take the financial burden off her family, to seek medical assistance, but mostly to regain complete independence.

“I don’t want to be on disability the rest of my life,” she said. “”I eventually want to become an independent person again. I don’t see why that’s not an attainable goal.

“My world is consumed by this,” she said.

At her lowest points, when she can’t get off her couch due to pain or get the cap off her pain medication, Benton has to rely on family and friends to come to her rescue.

“Modesty goes out the window when you’re 38 to 39 and your friends and family have to bathe you and brush your teeth and shave your legs,” she said.

Christy Isbell quickly became one of those friends when she and her family moved in next to Benton’s family in an apartment complex in Shelby in 2008. The two women began attending each other’s sons’ athletic events, especially baseball, as they grew closer.

“If I’m in screaming pain at midnight and I can’t get my medicine open, Christy will come over,” Benton said.

The Isbells and Benton now live down the street from each other and consistently spend evenings and meals together.

“We all try to help take care of each other,” Benton said of the Isbells. “I’m family by proxy. When I was completely alone, her (Isbell’s) whole family picked up the pieces to fill that void. They didn’t have to do that, but every one of them did.”

Benton currently is waiting for a phone call announcing a hearing date for her to prove her eligibility for disability benefits. December is her 13th month of waiting.

The Isbells often invite Benton to have dinner with them. Benton provides motherly wisdom for Isbell, as she’s raising two young sons and Benton has already passed through that stage in life.

Benton’s two sons still live in the area and help take care of their mother. She is thankful her sons are now adults, as she’s lost a level of independence due to her damaged arm.

“I was fortunate. If it was going to happen to me – not being able to help take care of others and myself – I’m glad it happened when my own children were grown,” she said. “They have to take care of mom. Without my little support group, I don’t know what I’d do.” 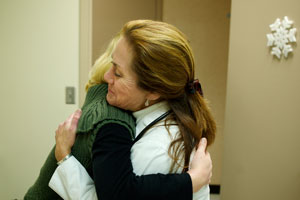 Benton hugs Dr. Lisa Oestreich, a neurologist who volunteers her time seeing patients who don't have health insurance at the Community of Hope Clinic in Pelham, during a visit on Dec. 8. (Reporter Photo/Jon Goering)

Part of her support group continues to be the Community of Hope.

“If I hadn’t found Community of Hope, I wish I could tell you I don’t know where I’d be. I would be in some ER somewhere with a Band-aid put over it,” Benton said. “I’m grateful for everyone at that clinic, for what they do. I have never had a doctor treat me the way she (Oestreich) treats me.

“It’s very appropriately named because it did give me hope,” she said. “There’s no way I could ever repay them.”

For more information on the Community of Hope Clinic in Pelham, call Executive Director Chris Monceret at 685-4154.

The Hollands decorate their Chelsea home with Christmas lights to compete with their neighbors. (Reporter photo/Christine Boatwright) By CHRISTINE BOATWRIGHT... read more