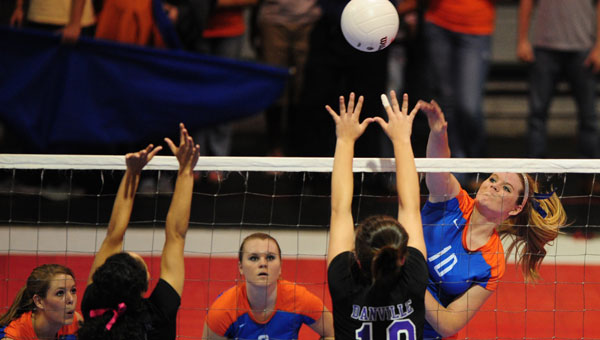 Versatile athletes are consistently labeled “do everything” players in sports.

A new catch phrase is needed to describe Montevallo High School senior Mallory Anderson, who was a “do everything at the same time” type player for the Bulldogs this season.

Anderson’s multiple skill set led to her selection as the Shelby County Reporter Player of the Year.

Anderson was most feared by opponents for her ability to finish off any play near her around the net. The 5-foot-8 outside hitter led Shelby County players in kills per set and racked up a total of 420 kills in 83 sets in 27 matches this season.

In addition to her attacking skills, Anderson displayed an impressive defensive ability with a team-high 447 digs. Anderson dug a ball up to keep it in system and finished off a point with a dramatic kill on several occasions for the Bulldogs.

Those weren’t the only positives Anderson brought to the court. The Bulldogs’ team leader also finished with 57 service aces and added 57 assists during her final season.

Anderson helped Montevallo return to the Alabama High School Athletic Association Class 3A Elite Eight for the first time in four years this season. The Bulldogs lost only once, to Class 5A Central-Tuscaloosa, during the regular season. Anderson played a key role in Montevallo’s 11 wins to start the season and a 14-match winning streak leading up to the Elite Eight, where the Bulldogs fell to Danville in the Class 3A quarterfinals.

Calera High School senior guard Deondre Haynes and his teammates will await the winner between Montevallo and Shelby County in... read more