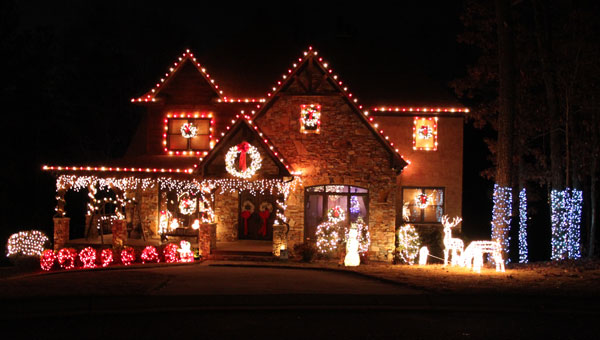 The Hollands decorate their Chelsea home with Christmas lights to compete with their neighbors. (Reporter photo/Christine Boatwright)

CHELSEA – The Christmas-light competition is heating up among residents of Chelsea’s Liberty Cove subdivision as three neighboring families battle for bragging rights.

Scott Grant said he started the competition with neighbor Jay Holland when Grant started boasting about his Christmas light display at the neighborhood Christmas party.

“It started with me and Jay,” Grant said, who lives at 209 Liberty Lane. “I was talking big, and they (Holland and Chris Smith) started talking, so it got bigger and bigger. He (Holland) has the nicer-looking house, but I have the better Christmas lights.”

Smith and his family joined the competition, and their house off Liberty Court currently sports lights and a clock counting down to Santa’s arrival.

Holland and his family live across the cul-de-sac from the Smiths at 305 Liberty Court.

“I really don’t have a good answer as to why we do it,” Holland said. “We’ve just always enjoyed Christmas — and the lights are a good way to show it.”

Grant said the subdivision is virtually unknown due to its location, so Christmas light viewers don’t know the decorated houses are illuminated and ready for viewing on the road by Liberty Baptist Church on Shelby County 47. 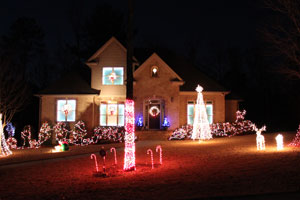 The Grants added the candy cane-striped tree this year to their Christmas decor. (Reporter photo/Christine Boatwright)

“We thought about having a Griswold trophy,” Grant said, speaking of “National Lampoon’s Christmas Vacation.” “One year, our neighbor had a Cousin Eddie Winnebago in the front of their house. They won that year.”

As the competition grew, the neighbors realized their need for more outlets and electricity in their homes.

“The first couple of years we lived here and decorated, I kept running into power problems,” Holland said. “So, after growing tired of blowing breakers, I permanently installed separate outlets along the landscape with each side of the house on a separate timer mounted in a wall inside. Now, I don’t have to touch them or worry about the power.”

Grant said the competition grows each Christmas, and he and his family change their decorations every year.

“Next thing you know, I’ll be Griswold on the roof with the staple gun,” Grant said, laughing.

Holland said the competition is all in Grant’s head, as “we know who the clear winner is.”

“It’s always fun when I get everything up outside and get our kids out front, all four of them, to turn them all on for the first time,” Holland said. “It’s worth it to see their eyes light up.”