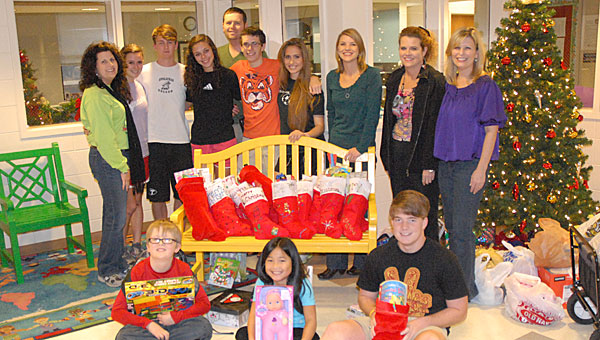 When third-grade teachers at Creek View Elementary School challenged their students to collect 20,000 aluminum can pull tabs before the Christmas break, they were blown away when they counted the tabs in mid-December.

By the time school officials called officials at the Ronald McDonald House in Birmingham to report the school’s total pull tab donation, the number had topped 50,000.

When Ronald McDonald House Volunteer Coordinator Kathy Robson came to pick up the tens of thousands of pull tabs on Dec. 15, she thanked the students for helping families in need from all over the state.

“Y’all did such a great job. We are so thankful,” she said.

The house is always full, and provides a temporary home for families who are unable to afford long-term lodging or frequent trips between their homes and Birmingham for treatment at Children’s, Robson said.

The organization collects aluminum pull tabs from a plethora of different organizations, churches and schools before selling them to a recycling company for 70 cents a pound. The Ronald McDonald house then uses the money to maintain the house and keep it cost-free for those who use it.

“It costs about $5,000 a month just to pay the power bill at the Ronald McDonald house,” Robson told the kids. “What you did really will help these families.”

The CVES students began collecting the pull tabs as part of a math lesson in late October, and soon learned the Ronald McDonald house was collecting them.

The kids smashed every goal their teachers set en route to collecting a total of 50,086 tabs in less than two months to donate to the charity.

“When I read the email (containing the total number of pull tabs), I thought it was such an incredible thing,” Robson told the kids. “I was so excited that I wanted to come here and thank you personally.”