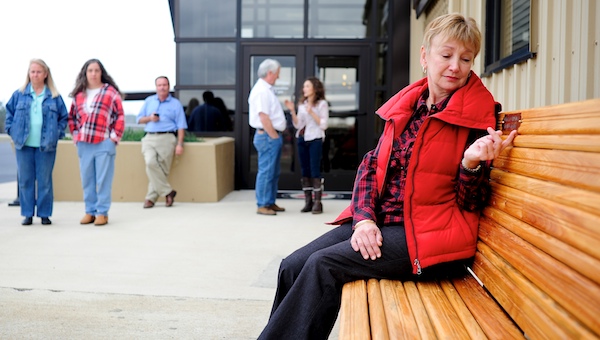 Vanessa Hoggatt, wife of pilot Jerry Hoggatt who died in a plane crash in Colorado in Dec. 2010, runs her finger along the plaque on the bench dedicated to her late husband during a dedication ceremony on Dec. 15 at the Shelby County Airport. (Reporter Photo/Jon Goering)

After several months of collecting donations at the airport, several local pilots purchased and installed a large wooden bench in Hoggatt’s honor. The bench rests in front of the airport’s terminal and offers a prime view of the runway.

Hoggatt, a Pelham resident, died on Dec. 15, 2010 after a plane he was riding in crashed into a mountain near Edwards, Colo.

“We thought it would be appropriate to have a bench in his memory,” Barnes said, noting he was thankful to Shelby County officials for allowing the pilots to add the bench to the airport. “Jerry was a special guy. He lived life to the fullest.”

The Hoggatts moved to Shelby County from Louisiana after they lost nearly everything they owned in hurricane Katrina.

Jerry Hoggatt’s wife, Vanessa, said the bench will serve as a reminder of she and her husband’s good times at the airport.

“He left me kind of abruptly,” Vanessa Hoggatt said. “I still think of Jerry every time I pass the airport, because he loved this place.

“When I sit on the bench and watch the planes, it will be like we are both sitting here together,” she added.

The bench contains a small plaque bearing Jerry Hoggatt’s name, which one day will be joined by other plaques bearing the names of other Shelby County pilots who pass away, Barnes said.

“This is the best gift I could get for Christmas,” Vanessa Hoggatt said. “These guys brought this bench here with kindness in their hearts. That’s the kind of guys we have up here. It’s a family.”