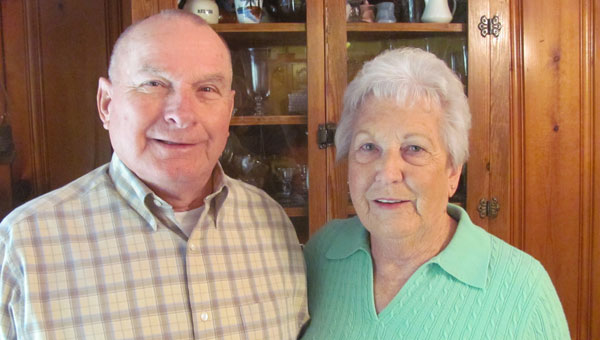 Lloyd and Anita Davenport will soon celebrate their 58th wedding anniversary. The couple met while attending school in Alabaster. (Contributed)

Lloyd and Anita Davenport will soon celebrate their 58th wedding anniversary. Their story has many ups and downs, sorrows and joys, disappointments and delights. Marriage is always full of surprises.

Davenport began working at the Siluria cotton mill at the age of 15. He worked second shift so he could go to school.

It must have been love at first sight, because this couple wanted to get married when Lloyd was in the 10th grade and Anita in the 11th. Anita was a cheerleader and Lloyd played football.

On Jan. 30, 1953 the late probate judge L. C. Walker performed the ceremony between the two teenagers who have become one of Alabaster’s most beloved couples.

In 1962, the Davenports built their present home on Smokey Road. When American Brake Shoe went on strike for nearly a year, Lloyd worked part-time at Cox Dairy making 75 cents per hour.

Alan, Gary, Jeff and Debra (7,5,2 and newborn) got all the basics they needed from two hard-working people. Gardens, penny-pinching and odd jobs pulled it all together.

After all the kids were in school, Anita went to work for Alabaster Plastics.

By 1965, the Davenports, under the urging of the late Mr. Robert Butler, joined Elliotsville Cumberland Presbyterian Church. They have remained there except for a 13-year stretch with his job in Columbus, Ohio. At one time all three sons played softball with their dad. Lloyd loves softball and is extremely proud of all the city championships and travel tournaments Elliottsville won from the 1960s through the 1990s.

Lloyd Davenport has been the inspiration for so many young men in the Cumberland church through his witnessing, his sincerity, his amazing ball playing for more than 40 years and his “never give up attitude” in coaching.

For lots of years Lloyd was not on God’s team. He tells often of all his mistakes and poor decisions. Having been “under the conviction of God” for several weeks he was actually “saved” at a beer joint called Murphy’s at the corner of Highway 150 and Highway 31.

The Davenports are “hospital ambassadors” and will visit at the drop of a hat. Neither Davenport is the boss. Each of them compliments the other, although those of us who know them have seen Anita “calm him down” a couple of times.

“Accepting Christ saved our marriage and has kept us on the right track,” Anita said.

Old Alabaster memories include Highway Café on Main Street, Simpsons Curb Markets (where the old Mitchells Feed was) Rock Villa across from the feed store, the first P&T Grocery on Main, Kent Dairy’s cows stopping traffic as they crossed the dirt road (Hwy 119) from one pasture to another and the old cotton gin.

The Davenports want to fish, travel, camp, take another cruise, see Montana, enjoy their family and be an integral part of God’s work. They love their life and are very happy living for God.

Michelle Martin, a teacher at Meadow View Elementary School, graduated from the University of Montevallo and lives in Alabaster with... read more