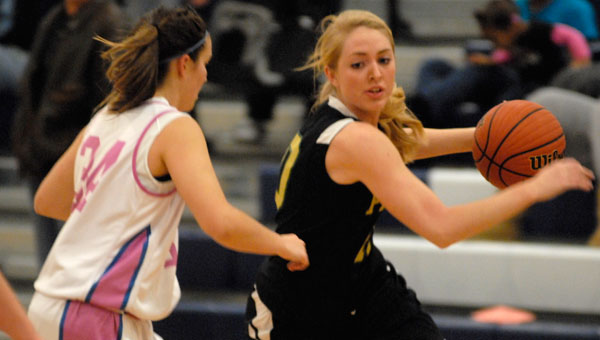 CALERA — The Pelham High School girls’ basketball team hasn’t played with a full deck of cards, so to speak, the past few years.

The Panthers took the court with a few of the best athletes in school sitting on the bench in street clothes or in the bleachers watching the action.

Pelham has a new look this season under first-year coach Jeremy Simpson, who added seniors Ashley Kate Kepler, Kaitlin Bunch and Ashleigh Taylor to the roster. The trio is part of a group of six seniors who have played a key role through the first month of the season, including the Panthers’ 48-33 win over Chelsea in the opening round of the Shelby County tournament Dec. 16 at Calera High School.

“Those are three seniors that didn’t play last year,” Simpson said. “You can’t put into words how big they’ve been.”

Amanda Mock led Chelsea (4-6) with eight points in the loss.

Allie Luster and Brooklyn Smitherman finished with two points each.

Cordrey gave Pelham its largest lead in the opening quarter after completing a three-point play with 2:33 remaining in the first period, which gave the Panthers an 8-3 lead.

Kepler completed a three-point play with 5:19 remaining in the second quarter to give Pelham its first double-digit lead, 17-7.

The Hornets cut into the lead down the stretch in the second quarter. Campbell’s 3-pointer with 11 seconds remaining in the first half cut the deficit to 21-16 heading into the locker room at halftime.

The Panthers pushed the lead to double-digits again early in the second half following a layup by Days with 6:01 left in the third quarter, which gave the Panthers a 27-16 advantage.

Pelham took its largest lead in the game seven seconds into the fourth quarter following an offensive rebound and putback by Cordrey, which gave the Panthers a 37-20 lead. The Hornets cut the deficit to 43-31 following a layup by Mock with 4:26 left in the game, but the Panthers stretched the lead back to 15 points in the final four minutes.

Simpson said the Panthers effectively slowed the pace of play, which allowed Pelham to exploit the Chelsea defense.

“We take what the defense gives us,” Simpson said.

Chelsea coach Wayne Trucks said the two teams run many of the same sets. The Panthers did a better job, Trucks said.

“They executed what they wanted to do better than we did,” Trucks said.

Pelham advanced to face the winner between Briarwood Christian and Calera in the tournament semifinals Dec. 19.