Hundreds flock to Night in Bethlehem 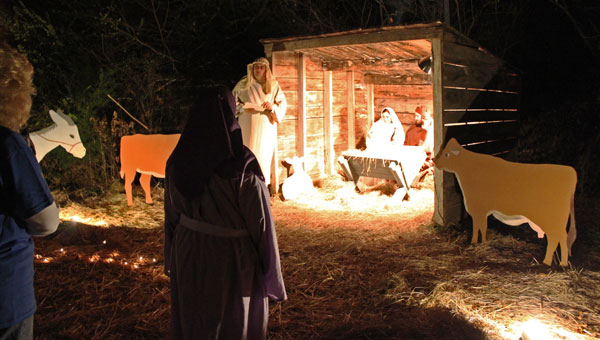 The second to last stop during Wilton Baptist Church's Night in Bethlehem as at the manger scene. (Reporter photo/Christine Boatwright)

WILTON – Hundreds of people filtered through the door of Wilton Baptist Church during this past weekend as the church held its fifth annual Night in Bethlehem.

The walk-through began when a young Roman soldier called the next group to step into the presence of King Herod as he spoke to the wise men of the biblical narrative. Each group then explored the “marketplace,” which was manned by members of the church in ancient garb.

“It just keeps getting bigger,” organizer Laurel Burns said of the event, which was held Dec. 15-18. “We have 70 people (church attendees) in costume or behind the scenes, and we’re a small church, with only about 100 on a Sunday morning.”

The church members have been working on scenes, props and costumes at least two nights a week since October, Burns said.

“We just tell them (the participating church members) to have fun and go with it,” she said.

Pastor Greg Sellers said he expected 400 to 500 people to experience the production. Attendees came from as far as Huntsville, Maplesville and Chilton and Bibb counties.

“We are tired, but we’ve been so blessed by it in the end,” Sellers said. “We’re sad it’s over because it’s such a great time.”

When asked about changes to the program, Sellers said the innkeeper “has gotten meaner” this year and the market place was bigger. Also, baby Jesus was a baby doll, as the only baby in the church was only a month-and-a-half old and too young to play the Christ child.

“Most people come in really touched,” Sellers said. They forget what the world has added to Christmas. Jesus loved us so much he came to a smelly manger. He came to the manger, but it didn’t end there.”

Hueytown resident Dorothy White brought her grandson to participate in a Night in Bethlehem.

“It’s a truer meaning as to what Christmas is about,” White said. “It’s truly a celebration.”