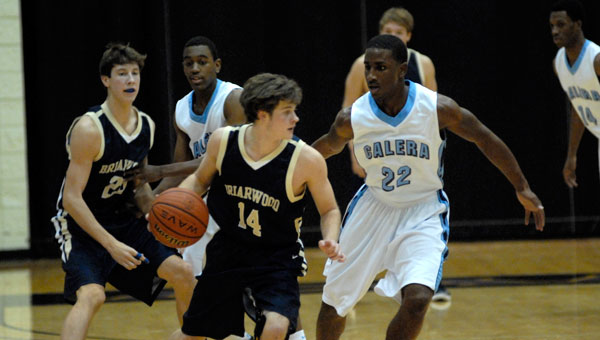 MONTEVALLO — The Calera High School boys’ basketball team was knocked out of the Shelby County tournament prematurely a year ago.

The Eagles, with a majority of their roster returning, didn’t want to suffer a similar fate this season. Calera defeated Briarwood Christian 66-46 in the semifinals Dec. 19 at Bank Trust Arena on the University of Montevallo campus to set up a meeting with rival Thompson in the championship game.

The Eagles, who defeated the Warriors 47-44 in the first matchup between the two teams this season, will face the Warriors in a rematch Dec. 20 at 7:45 p.m.

Deondre Haynes and Ronnie Clark led Calera (12-1) with 18 points each in the victory.

Clark converted a three-point play with 1:58 left in the opening period to give the Eagles a 11-6 lead at the end of the first quarter.

Calera opened the second quarter with a 6-0 run, capped with a jumper by Haynes, to take its first double-digit lead in the game at 17-6 with 5:36 remaining in the first half.

Briarwood Christian responded with a 6-0 run of its own to cut the lead to 17-12 following a jumper by Fincher. The Lions cut the deficit to four points, 23-19, following a three-point play by Woods with 2:46 remaining in the first half.

However, Calera responded with a 7-0 run, capped with a 3-pointer by Haynes with 1:24 left in the second quarter, and carried a 30-21 lead into the locker room at halftime.

The Eagles took control of the game in the third quarter following a 10-0 run, capped with a free throw by Howard Morris, which gave Calera a 40-21 midway through the period.

Haynes’ breakaway slam with 2:49 left in the third quarter gave the Eagles a 50-26 lead and a layup by Bishop with seven seconds left in the period pushed Calera’s lead to 57-28.