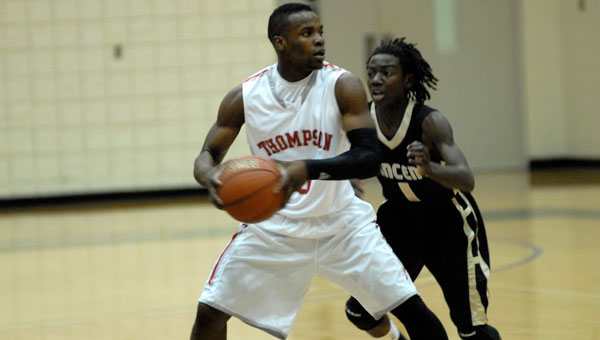 MONTEVALLO — Thompson High School boys’ basketball coach Patrick Davis was concerned about the 3:30 p.m. tip-off time for the Warriors’ matchup with Vincent in the Shelby County tournament semifinals Dec. 19 at Bank Trust Arena on the University of Montevallo campus.

His players put his fears to rest with a fast start in a 72-40 win over the Yellow Jackets, which earned the defending Shelby County tournament champions a return trip to the championship game Dec. 20 at 7:45 p.m.

Davis said the Warriors have had the date circled since preseason drills began in October.

“(Defending the tournament championship) was one of our goals from the beginning of the year,” Davis said. “It’s important to us.”

DeAndre Gamble led the Warriors (10-4) with 15 points in the semifinal victory.

The Warriors opened the game with a 9-0 run, capped with a layup by Johnson, in the first two minutes.

Torbert knocked down a pair of free throws with 40 seconds remaining in the opening period to cut the Yellow Jackets’ deficit to 19-8 at the end of the first quarter.

Following a 3-pointer by Torbert in the first minute of the second quarter, Thompson went on a 11-0 run to take a commanding 32-11 lead with 3:37 left in the first half. The run included a steal and a fastbreak layup by Threatt and was capped with a 3-pointer by Lewis, which pushed the Warriors’ lead to 21 points.

A layup by Lewis with 21 seconds left in the second quarter capped a 6-0 run by the Warriors in the final two minutes of the first half and sent Thompson into the locker room at halftime with a 39-15 lead.

“I was pleased with our focus in the first half,” Davis said.

The Warriors led by as many as 32 points in the second half, the final time following a layup by Davis, which gave Thompson a 72-40 lead with 24 seconds left in the game.