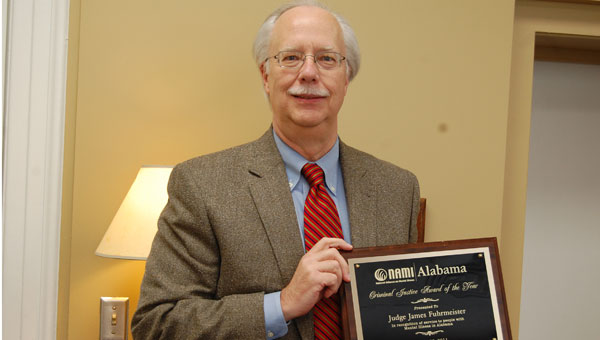 Shelby County Judge of Probate Jim Fuhrmeister has been awarded the Criminal Justice Award of the Year by the Alabama branch of the National Alliance on Mental Illness for his work with Shelby County’s mental health court.

“We can help them. The mental health courts can help them. But only if they choose to help themselves first; they have to be invested in their own care,” Fuhrmeister said.

The purpose of the mental health court is to reduce the amount of re-arrests of criminal defendants diagnosed with mental illness. The mental health court team provides those individuals with an alternative program to ensure that they receive the correct therapy and continue to take prescribed medications regularly.

“It’s all of our obligations as people to leave our communities in better shape than they were when we got here, to improve the quality of our community,” Fuhrmeister said.

Fuhrmeister began working with the mental health court shortly after his wife and former probate judge, Patricia Fuhrmeister, passed away. Fuhrmeister said he and his children received an outpouring of love and support from the citizens of Shelby County. Fuhrmeister views his work as a labor of love and a way to give back to the community.

“I view every day that I come to work as a way for me to help repay the community for what they did for us,” Fuhrmeister said.

Fuhrmeister finds his work very rewarding and hopes that education and awareness will help diminish some of the stigma that comes with mental illnesses.

“I think awareness and talking about it does two things,” he said. “It first makes people aware that there are people who are sick and need our help, and that’s what it is, mental illness. It’s an illness and some may be sicker than others. Secondly, it supports the families; mental illness is a terrible hardship for families. It’s very trying on relationships.”

Fuhrmeister praised local law enforcement for being well trained and aware of individuals suffering from mental illness in the community. Fuhrmeister doesn’t take sole credit for the award and said the recognition doesn’t belong to just him.

“This award validates what mental health court is doing, and that’s very rewarding for us,” he said.

By NICOLE LOGGINS / Staff Writer  COLUMBIANA – Dr. Stancil Handley has a vision for Columbiana. So much so that... read more