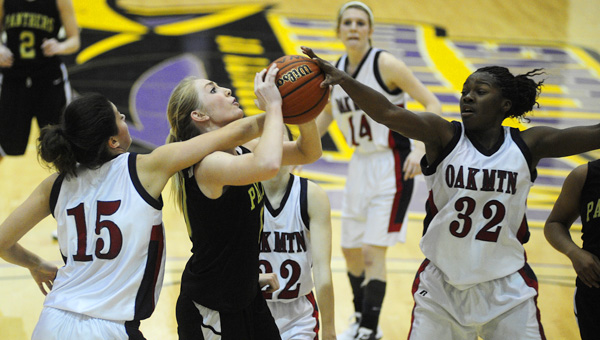 Pelham High School senior guard Ashley Kate Kepler is fouled on a drive to the basket in the Panthers' 47-41 win over rival Oak Mountain in the Shelby County tournament championship game Dec. 20 at Bank Trust Arena on the University of Montevallo campus. (Reporter Photo /Jon Goering)

MONTEVALLO — Pelham High School girls’ basketball coach Jeremy Simpson is tired of talking about the past.

The Panthers’ six-win season a year ago never crosses his mind.

The first-year coach would rather talk about the present following Pelham’s 47-41 win over rival Oak Mountain in the Shelby County tournament championship game Dec. 20 at Bank Trust Arena on the University of Montevallo campus.

“I think people are still judging us because of our 6-18 record last year,” Simpson said. “It’s a completely different team. It’s a different energy and a different focus. The girls deserve every bit of the credit.”

Ashley Kate Kepler led the Panthers (13-2) with 21 points in the victory.

Kepler said the Panthers had a chip on their shoulder entering the title game.

“Nobody expected us to win,” Kepler said. “We just showed everybody how good we are.”

Pelham took a nine-point lead midway through the second quarter before a 7-0 run by Oak Mountain cut the deficit to 16-14 following a layup by Lee with 2:26 remaining in the first half.

Kepler drained a 3-pointer and completed a three-point play in the final two minutes of the second quarter to help the Panthers carry a 22-17 lead into the locker room at halftime.

Pelham took its first double-digit lead in the game following a jumper by Days from the corner, which gave the Panthers a 30-20 lead with 1:41 remaining in the third quarter. Whitman’s offensive rebound and putback with five seconds left in the period gave Pelham a 12-point lead heading into the fourth quarter.

The Eagles cut the deficit to 40-35 following a 3-pointer by McGowan with 3:20 remaining in the game, but the Panthers held off Oak Mountain down the stretch.