Christmas is a day of gratitude and remembrance for those who keep us safe.

The Blue Star flag in my window is thankfully down. I put it up when son’s brother-in-law was deployed for his second tour in Afghanistan to fight to keep us safe from the Global War on Terror.

Sgt. Drew Rush with the National Guard’s 20th Special Forces is home this Christmas, and our family is filled with deep gratitude.

His homecoming was especially poignant this second time not only for his wife, but also his two small children.

His wife wept with joy, his two-year-old daughter was all smiles at seeing her Daddy and his four-year-old son hugged his Daddy’s neck and simply would not let go.

Rush was in Afghanistan on Christmas during his first tour.

He wrote a letter home after one of his fellow soldiers had died in a gun battle just days before Christmas. I share it with you with his permission. 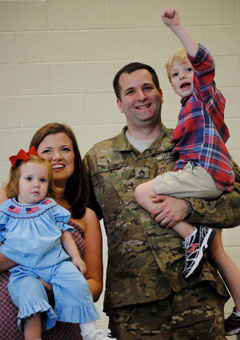 “I don’t know his name. I don’t even know where he was from. I do know he was my brother. A U.S. soldier just like I am.

“As I stood there at the position of attention in that brisk Afghan wind on a cold December night just a few days before Christmas, I realized that my purpose here is bigger than me, bigger than any of us.

“As his body was carried past, hundreds of fellow soldiers lined up on both sides of the road. They came not because they were ordered but because they wanted to be there to honor their brother, a brother who gave his life for his country so that his family, his friends, and his country could be free.

“It was probably the most important thing I have done over here. It didn’t seem like much, just one face out of hundreds, but it meant something to me as I am sure it did to each soldier.

“It was a sight to see; soldiers from all units and from different countries lined the side of the road leading to the aircraft that would take his body home. Reality hit hard. We are still at war; people are still dying. What we are doing is dangerous work, but it needs to be done.

“We will continue to aggressively confront the enemy and we will win this war on terrorism so that all of our families, friends, and our countries can continue to live free. What my fellow soldier, my brother in arms, did for his country was the ultimate sacrifice. He will not be forgotten.

“Enjoy your holidays and every day that you are Americans, because the price paid for our freedom has been high, a price that we as soldiers are willing to accept and take on.”

I have put the blue star flag back in my window, and it will remain there till all our soldiers come home from keeping us safe.