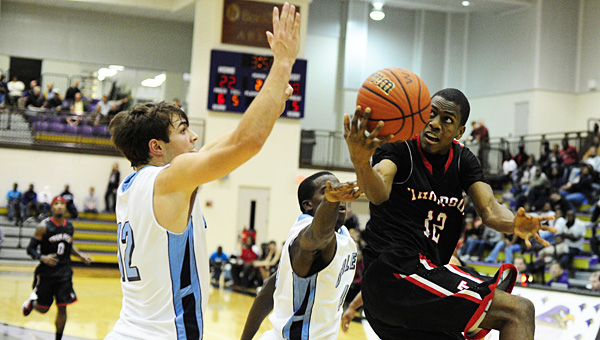 The customary exchange set the stage for a battle between the Warriors and the Eagles with the title of Shelby County’s best riding on the outcome.

Haynes one-upped Threatt earlier in the month, but Thompson’s team leader has the upper hand following the Warriors’ 74-65 win over the rival Eagles.

“It’s been one of our team goals since the beginning of the season,” Threatt said.

Deondre Haynes and Ronnie Clark led Calera (12-2) with 18 points each.

Calera controlled the game throughout the opening quarter before Lewis knocked down a 3-pointer to give Thompson its first lead, 14-13, with 1:22 remaining in the first period.

A jumper by Hyde quickly put the Eagles back on top, but Gamble drained a jumper at the buzzer to give the Warriors a 18-17 lead heading into the second quarter.

Morris scored a basket with two seconds remaining in the first half to cut the Eagles’ deficit to 40-31 heading into the locker room at halftime.

The Warriors extended their lead to 13 points in the third quarter following a 3-pointer by Lewis with 1:14 remaining in the period, which gave Thompson a 55-42 lead.

However, a breakaway slam dunk by Haynes with 16 seconds remaining in the third quarter cut the deficit to 55-48 and gave the Eagles a boost of energy heading into the final eight minutes.

Calera cut the deficit to five points, 57-52, following a layup by Clark with 6:01 remaining in the game. Thompson responded with a 6-0 run to push its lead back to double-digits at 63-54 with 2:36 remaining.

Calera trimmed the deficit to 68-63 following a 3-pointer from the top of the key by Haynes with 1:30 left in the game. However, the Warriors responded by knocking down four consecutive free throws and putting the game out of reach.

Thompson coach Patrick Davis said the winning the Shelby County tournament title   two years in a row means a lot to his players and assistant coaches.

“We take a lot of pride in winning the (Shelby County) tournament,” Davis said. “It’s important to us.”