Ganus tabbed Player of the Year 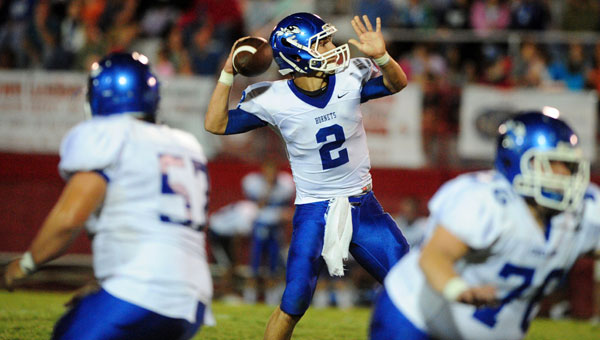 Chelsea High School senior Jake Ganus is being recruited to play defense next fall at UAB.

After seeing Ganus’ offensive numbers in his senior season, the Blazers’ coaching staff may want to give him a shot on the other side of the ball before making a final decision.

Ganus talent on offense, defense and special teams led to his selection as the Shelby County Reporter Player of the Year.

Ganus, who committed to play for the Blazers in July, started at quarterback for the Hornets and finished 83-of-156 passing with 1,016 yards and nine touchdowns.

Ganus also rushed for 1,473 yards and 22 touchdowns as the feature back on the Chelsea offense.

Ganus, who averaged more than seven yards per carry, had his Player of the Year moment in the Hornets’ first win against rival Shelby County in Columbiana in 13 years back in September.

Ganus rushed for 264 yards and two touchdowns in the win, including a 70-yard scoring run around right end. Ganus stiff armed one defender and didn’t give any of the other 10 defenders on the field a chance to touch him on the play.

As impressive as Ganus was offensively, he was also a pretty good defender when asked to play both ways. Ganus finished with 25 solo tackles, including two tackles for a loss, one interception and one blocked kick in limited playing time.

Ganus also returned 13 kickoffs for 192 yards and finished with an average of 14.77 yards per kickoff attempt.

UAB  pledge passed for 2,671 yards and 35 touchdowns in his final season

Finished with 1,240 yards and 13 touchdowns for the Bulldogs

Caught 50 passes for 767 yards and 13 touchdowns this year

Reeled in 49 receptions for 540 yards and four touchdowns

Two-way starter proved value as both blocker and receiver

Blocked for 1,000-yard rusher and protected quarterback for Lions

Accounted for 2,489 total yards and 31 touchdowns as a senior

Finished with 54 tackles after playing several positions for the Bulldogs

Recorded 75 tackles, including 11 for a loss, for the Lions

Led Lions with 119 total tackles as quarterback of the defense

Racked up 86 tackles and scored four times on defense

Punishing hitter headed to UAB registered 71 tackles as a senior

Top prospect forced offenses to look for other receiving options

Triple-threat did everything from kickoffs to kick returns for Wildcats