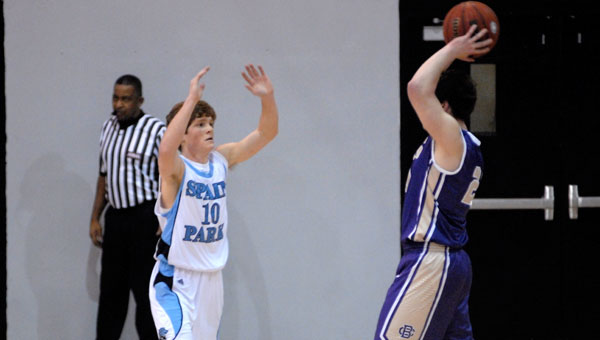 The Jaguars have claimed several championships, including an Alabama High School Athletic Association Class 6A Northeast Region title in 2007, and has made a trip to the Class 6A Final Four.

Despite its success on the court, Spain Park has never been crowned the champion of its own in-season tournament, the Jaguar Classic.

The Jaguars added to their list of accomplishments Dec. 22 by defeating Christian Brothers High School of Memphis, Tenn., 54-44 in the championship game of the 2011 Jaguar Classic.

First-year coach Neal Barker said it was only a matter of time before the streak ended.

“We’re just building on the success Coach (Brian) Moon had here,” Barker said. “It means a lot to me.”

Blake Dudchock led the Jaguars (10-5) with a game-high 15 points in the victory. Dudchock also grabbed eight rebounds in the win.

Robby Prater chipped in 13 points. Prater knocked down 8-of-9 free throws, including 6-of-6 in the final two minutes to ice the victory.

Dudchock scored a basket to give the Jaguars their largest lead in the first quarter, 8-4, with 1:57 remaining in the period.

Spain Park opened the second quarter with a 8-0 run, which included three consecutive jumpers by Jones and a pair of free throws by Prater, to take a 16-11 lead with 3:38 left in the first half.

However, Christian Brothers responded with a 7-0 run of its own to take an 18-16 lead with 2:03 left in the second period. Dudchock’s basket with 1:46 remaining tied the game at 18-18 heading into the locker room at halftime.

The Jaguars opened the third quarter with a 7-0 run, capped by Prater’s 3-pointer from the top of the key, to take a 25-18 lead two minutes into the period.

Christian Brothers responded with a 7-0 run to tie the game at 25-25. The Purple Wave carried a two-point lead, 32-30, into the fourth quarter.

Spain Park went on a 8-0 late in the fourth quarter to seal the victory. Martin converted the three-point play and Prater knocked down two free throws to cap the run, which gave the Jaguars a 44-34 lead with 1:50 remaining.

The Jaguars knocked down 6-of-8 free throws in the final 1:12 to clinch the victory.

“It’s an unbelievable feeling,” Prater said. “It’s the hardest field we’ve ever had.”