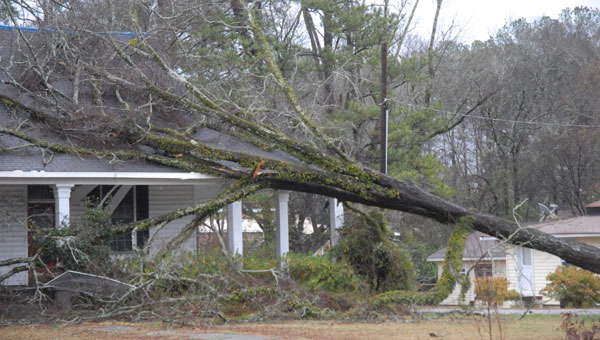 A tree fell on a house owned by Todd York on Main Street in Columbiana during a storm Dec. 22. (Reporter Photo /Wesley Hallman)

Ebert noticed Sheila Finley’s concern for the the deteriorating weather conditions outside, with dark clouds moving into downtown Columbiana.

“The good Lord is not going to take this church away with all these people in it,” Ebert said she told Finley. “Just sit down and be quiet.”

Ebert’s words were true, thankfully, for grandchildren of family members attending the funeral, who were alone in Ebert’s house across the street from the church when the storm happened Dec. 22 at approximately 1:45 p.m.

Ebert’s house was spared damage, but the house next door had a tree fall on its roof and lost two other trees in its yard.

Kaitlyn Higginbotham, Ebert’s granddaughter, said the children in Ebert’s home took shelter in a closet in the house.

“We just heard a loud thump,” Higginbotham said. “Thank the Lord. He was definitely looking out for us.”

The house damaged during the storm, located at 305 N. Main St., was recently sold to Todd York and his family, Ebert said. The York family, who still hasn’t moved into the house, was away on vacation, Ebert said.

The house, which is undergoing renovations, has been devastated by multiple natural disasters, Ebert said.

“It’s a beautiful home,” Ebert said, “but it’s not had a good history. It’s had two fires and now this.”

Ebert said she couldn’t tell if it was straight-line winds or a tornado, but she and her family members at the church knew when the storm moved through.

“It swung the doors of the church open,” Ebert said. “We could see the winds swirling outside.”

High winds, which came during a National Weather Service tornado warning for Shelby County, also toppled several other trees in the city.

A Columbiana Police Department dispatcher said at about 3 p.m. the department had received a call of a tree down on a power line on Alabama 25.

Columbiana Mayor Allan Lowe said the Columbiana Fire Department had gotten reports of a “couple dozen” trees down, mainly on North Highland Drive. At about 3:20 p.m., Lowe said the city had not received any reports of injuries, and “all indications” were the downed trees were caused by straight-line winds.

Lowe said the city did not sound the tornado sirens during the severe weather because of a city policy.

FROM STAFF REPORTS The National Weather Service has issued a tornado watch for Shelby County which is in effect until... read more