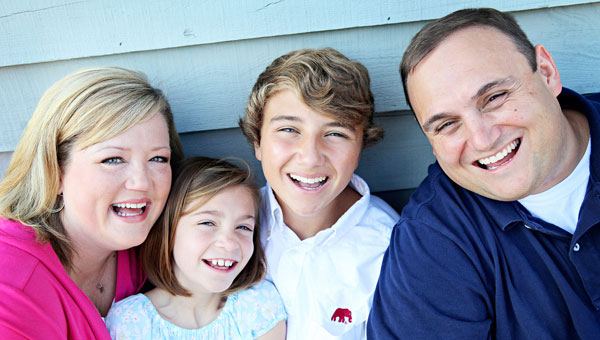 From left, Melanie, Brittney, Reed and Richard Henderson recently appeared on the CBS show "Home for the Holidays," where they shared the story of Brittney's adoption. (Contributed)

When Helena Elementary School kindergarten teacher Melanie Henderson received the news from her coworker, Denise Davis, a few months ago, she was floored.

“She ran into the lunchroom and said ‘Oh my gosh, I’ve got to tell you something right now,'” Henderson said, recalling the conversation. “She told me she had called the (Home for the Holidays”) show without me knowing, and they had called back to say they were interested in featuring our family.”

Several weeks later, Henderson and her family were on a plane bound for the CBS studios in Los Angeles.

For the Hendersons, being selected for the show was a welcome surprise shortly after they finalized the adoption of the newest member of their family: 9-year-old Brittney.

After Davis told Henderson the show was interested in featuring her family, the Hendersons interviewed with producers of “Home for the Holidays.” Following the interview, the producers told the Hendersons they had been selected as one of only four other families in the country to be featured on this year’s show.

The annual show, which works in conjunction with the Dave Thomas Foundation to promote foster care adoption, has helped to find permanent homes for more than 20,000 children over the past 12 years.

Before the Hendersons flew out to Los Angeles for the studio taping, CBS crews filmed several segments for the show at their home, around Helena and at HES. While at the CBS studios, the Hendersons met Martina McBride and Mary J. Blige, whose performances will be part of the show when it airs on Dec. 21.

CBS selected the Henderson family after learning the details behind Brittney’s adoption.

A few years ago, the Henderson said she and her husband had already decided they wanted to adopt a foster child when she met Brittney. At the time, Brittney was in foster care, and was in another teacher’s kindergarten classroom at HES.

“There was just something about her. It was love at first sight,” Henderson said of Brittney. “We worked all year getting to know her foster parents, and we actually found out she would be moving in with us at the end of that year.”

Because Brittney still had contact with her biological mother, the Hendersons were not able to immediately adopt her. After working through legal issues for a few years, the Hendersons finalized Brittney’s adoption on Aug. 25, 2011.

Because the “Home for the Holidays” show helps connect foster children with adoptive families, Henderson said filming the show was a positive experience for Brittney.

“She has come so far academically from where she was,” Henderson said, noting Brittney is now in third grade at Helena Intermediate School. “She is the kindest, sweetest little girl I know.”