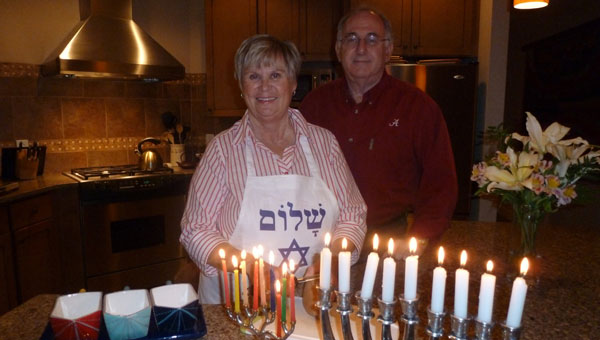 Olivia and Jack Kalin in their kitchen with their menorahs lighted for the eight days of Chanukah. (Contributed)

The Jewish holiday Chanukah (Hanukkah) is an eight-day festival which celebrates the reclamation of the Holy Temple in Jerusalem by a small band of Macabee Jews from the Greeks in the second century B.C.

Oil in the temple miraculously lasted eight days when only a one-day supply was on hand. Dec. 28 is the last day of Chanukah in 2011.

Olivia and Jack Kalin have celebrated Chanukah all their married life. The Kalins moved to Columbiana almost five years ago. Jack is chief toxicologist for the Alabama Department of Forensic Sciences and Olivia is a member of the Columbiana Culture Club and Friends of the Library. They built their retirement home on Lay Lake so Jack “could putter up and down the river, ” a childhood love from growing up in Canada with lots of water. They have two children: Joseph, 26, and Sarah, 25. They are members of Temple Emanuel in Birmingham.

“I converted (to Judaism) within a year of our marriage,” said Olivia. “I had been raised in a wonderfully liberal Methodist home. However, from my early teens I had questions about some aspects of the beliefs with which I had been raised. When I met Jack and our relationship became a bit more serious, I visited his synagogue and felt like I had come to a spiritual home.”

After marriage, Olivia began an intensive study and converted. When Joseph and Sarah turned 13, Olivia studied with them and participated in her own Bat Mitzvah, reading the Torah in Hebrew. In the words of Jack’s family, Olivia has become “more Jewish than any of us.”

In the Kalin home, Chanukah is celebrated with long-standing Jewish traditions beginning with the lighting of the candles on the Menorah for eight nights. The children receive presents including “gelt,” gold foil-wrapped chocolate coins that symbolize charity. The children spin Dreidel tops, Jewish toys with a Hebrew letter on each side to remind of the times when it was forbidden to study the Torah. On Christmas Eve, the family serves at a soup kitchen for homeless women and children, one of their most treasured traditions.

The yummy food is one of the highlights of Chanukah. Olivia cooks delicious treats, like potato latkes (potato pancakes), Sufganyot (jelly-filled donuts covered with powdered sugar), cheese-filled donuts fried in oil and dipped in honey and cheese blintzes.

Olivia shares her Chanukah recipes with you. Enjoy!

Spread grated potatoes and onion on a kitchen towel and roll up jelly-roll style. Twist towel tightly to wring out as much liquid as possible. Transfer potato mixture to bowl and stir in egg and salt.

Heat ¼ cup oil in 12-inch skillet over moderately high heat, hot but not smoking. Spoon two tablespoons mixture into skillet spreading into 3-inch rounds with fork. Reduce heat and cook until undersides are brown, approximately five minutes. Turn latkes over and brown other side. Transfer to towel, drain, and sprinkle with salt. Keep latkes warm on a wire rack set in a shallow baking pan in oven.

Mix together the yeast, two tablespoons sugar, and the milk. Let sit until bubbles.

Knead dough until forms a ball. Add butter; knead some more until butter is absorbed. Cover with towel and let rise overnight in refrigerator.

Roll dough to thickness of 1/8 inch.

Cut out dough into 24 rounds with 2-inch round glass. Take ½ teaspoon of preserves and place in center of 12 rounds. Top with other 12 rounds and crimp edges down, sealing with egg whites. Let rise for 40 minutes.

By PHOEBE DONALD ROBINSON / Community Columnist Christmas is a day of gratitude and remembrance for those who keep us... read more